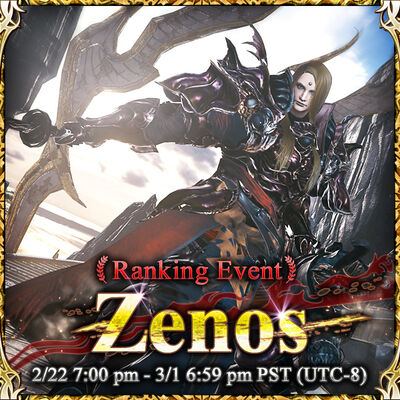 Zenos is a Ranked "battle tower" event available in February 2020. It features duels against Zenos (Sicarius) (sort of).

However, as a new challenge, what attacks hit you are dependent on your Multiplayer Role. Yes, Multiplayer choices are affecting your Single Player battles!

No story! Just kill him.

Immune to Stun, and

Immune to Slow. Except in specific circumstances, Zenos has

Break Immunity, but does not show it in his status bar.

Zenos will attack with abilities similar to Zenos (Sicarius), but with an entirely new mechanic for dodging his attacks:

When Zenos is preparing his Art... attacks, he cannot be killed. Reducing him to 1 HP will gain him

Perfect Defense, allowing his attack to hit on the next turn. You will still need to inflict 1 HP of damage to him afterward to defeat him.

If Zenos is going to cast Storm, Swell, Sword, then he will gain

Perfect Defense when he hits 50% HP. On his next turn, he conjures two swords alongside him, and gains

Absolute Defense for 3 turns while he prepares the attack. The swords can't be killed, but reducing them to 1HP each will gain them

Perfect Defense and greatly reduce the damage of the attack.

In the Phantasmic Loop, Zenos will use multiple abilities, so it's to your benefit to set different jobs on your Main Job and Sub-Job. Switch between them with Job Change Recast. Zeno also gains a

Time Limit, so you will need to work efficiently to defeat him.

The region is the standard Tower of Trials -- one path with a staircase, leading up to the top at the 50th "Ragnarok" level. You cannot return to previous levels once they've been beaten.

Upon finishing the area, you're transported to The Phantasm as your starting point into the Phantasmic Loop. This is an irreversible jump -- once you complete one of the three initial areas, you're stuck on the Phantasmic Loop with that many Loops completed.

With the recent announcement of the game's impending shutdown, participation is very low, so anyone who completes all of the normal levels will easily make it within the top 10,000 players. The top 2,000 players will get