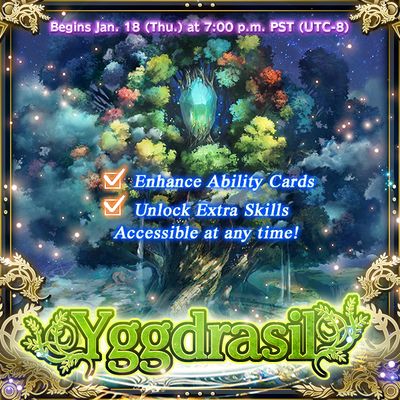 Yggdrasil is a group of ability enhancement regions for leveling abilities and unlocking extra skills. The regions are a permanent place to find the Scroll Cards that were found in the Item Exchange during the initial Ability Card debuts. (see Card Batches.)

Currently, there are 4 regions:

Debuting in December 2018, this region offers areas that drop specific Material Cards. These areas each feature battles exclusively against the fiends that drop the specific selected material (e.g. The Fiery Gems area only has Red Dragons as foes). These fiends drop materials ONLY, but at their normal drop rates, so you'll gather 0-3 of that material per fight.

Debuting Jan-April 2018, these are permanent homes for most of the Scrolls featured in the Item Exchange during late 2017, plus older Abilities that don't have associated fiends to upgrade them.

Debuting May-Dec 2018, these are permanent homes for most of the Scrolls featured in the Item Exchange during early and mid 2018.

Debuting Jan-Oct 2019, these are permanent homes for most of the Scrolls featured in the Item Exchange in late 2018 and early 2019.

Debuting in Nov 2019, these are permanent homes for most of the Scrolls featured in the Item Exchange in late 2018 and 2019. With the closure of the game in early 2020, all remaining cards were added to batch 6, ignoring the usual 3-4 month delay.

The Zones are populated with areas that each focus on a specific Ability Card. Finishing one of these areas will always reward 5x Scroll Cards for the selected Ability Card.

Each area is shown with the color of the associated element, and the title starts with the relevant Job Class icon. Enemies for each area are the same element as the listed one, so you're encouraged to show up with something in the opposite element. However, since the enemies tend to be Dust fiends, Elementals and PuPus, you should be able to easily kill anything you encounter.

The most annoying enemies here are in the

Life areas, which feature Gold Bombs. These immediately explode when they show up, taking half your remaining health with each one, but these alone cannot kill you.

In the center of the Yggdrasil: Materials region is a set of six areas: one in each element. These areas have a high cost (60 stamina!) but they will net 20x the usual amount of skillseeds and have 6x the normal chance to unlock Extra Skills. These items stack with similar bonuses auto-abilities and Mobius Day, so you can gain a lot in a short time.

Note that the strength of the fiends is still rather weak. In order to maximize the number of skillseeds dropped:

Prior to this region's debut, these areas were found in the other Yggdrasil regions, clustered around the crystal.

Starting in September 2019, the Yggdrasil: Materials region also gained two areas for fighting Cactuars! They aren't the main enemy (they're still uncommon), but the battles have 30 skirmishes for 30 stamina, greatly increasing the chances that you'll run into