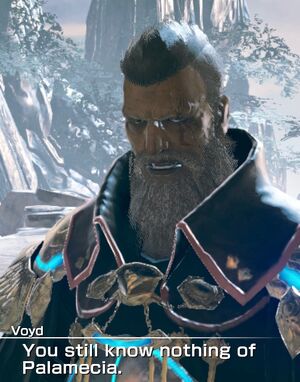 Voyd is one of the Characters in the game Mobius Final Fantasy. He is the sole inhabitant of the Tower of Trials.

In Adamanterrapin Terror, he challenges Wol and the Blanks to face fearsome beasts from various alternate dimensions.

In Dahaka Assault, Voyd identifies himself as a Shadow -- a being born from the leftover emotions and wills of the blanks who failed in their quest to become the true Warrior of Light. Shortly after, he is seemingly "offed" by the Azure Witch, who takes over management of the Tower. However, due to his existence as a Shadow, it is unclear whether or not he is actually capable of dying.

Voyd first appears to be a stern and contemptuous individual, however as Wol progresses through the Battle Tower, he reveals himself to be a more caring individual who only wishes to aid in the growth of the blanks who aspire to be the Warrior of Light and not to see them die in their attempt to surmount the tower.

The exact nature of Voyd's existence is a mystery, with Wol commenting that he may be the same type of being as Vox following their first confrontation.