Vargas is one of the boss Fiends in Mobius Final Fantasy. He runs the Infinite Arena, where Blanks go to challenge each other for supremacy and prizes. He was first introduced in the Inferno Arena event.

Vargas is patterned after the Grappler Job (with a sub-class of Wrestler), and uses the Haymaker as a weapon.

On start of battle, Vargas casts

Break Immunity on himself for 3 turns plus a few other boons, throws a lock on all of your abilities (Clouded X), then hits with heavy physical attacks... often with elemental boosts. You will need to endure his attacks until his Immunity drops, before you can properly damage him.

Wall on himself when his health drops below 50%, regardless of what state he's in at the time.

Vargas appears in the following events. 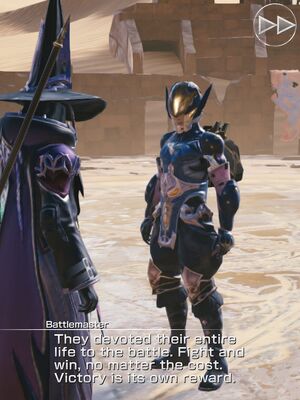 Vargas as the Battlemaster

The Infinite Arena is a place for Blanks to challenge each other for supremacy and prizes. Many of those Blanks have lost themselves in the glory of victory, however, and have become Shadow Fiends. Those fiends reigned supreme in the Arena for uncounted generations... and all of their victories went to feed the power and hunger of the Old Gods, The Triad (The Goddess, The Valiant, and The Trickster).

A lone Blank striving to be the Warrior of Light, Vargas attempted a different approach: conquering the Arena with the power of prayer. He spent a long time at it, but the power of the Triad proved too much. Vargas ended up as Battlemaster for the Infinite Arena, and the most powerful of the Shadow Fiends there... until Wol defeats him. But like all notable fiends in Palamecia, Vargas keeps coming back.