Ultros is one of the most frequent special event Fiends in Mobius Final Fantasy. He first appeared in the Ultros Ultimatum Battle Tower event, and has returned for many more since then. He is very fond of the females, but also tends to be very chatty with the males as well. (though it doesn't respond well when Wol gives as good as he gets!) Ultros is best friends with Typhon, and almost always appears with Typhon alongside.

This creature throws frequent amounts of Octopus Ink, which causes a number of potential ailments. He also can ask for help from Typhon, who casts extra boons and lays on the damage. Better to kill Typhon first when they're both present.

Befitting the Summer Resort event series, Ultros appeared during The Cephalopod's Concoction with a beach umbrella, life preservers, fans and shaved ice... along with a few new actions. It remains to be seen if any of these are included in his future appearances.

In many instances, Ultros is

Immune to Slow and

Immune to Sleep. Ultros typically gets 2-3 actions per turn. 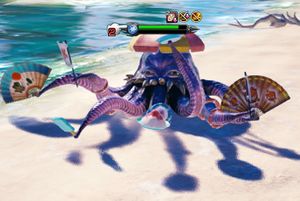 Ultros appears in the following events, on all of the Boss levels.