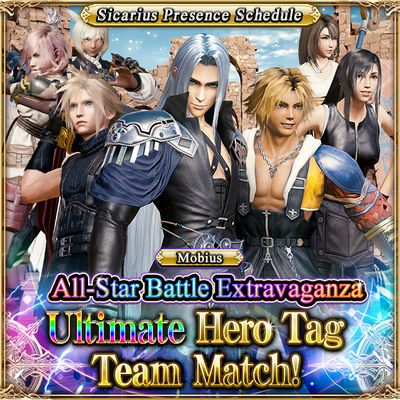 The Ultimate Hero Tag Team Match was a special multiplayer event, featuring battles against the Ultimate Heroes (Warriors of Light) from other games in the Final Fantasy series. The event was part of the Mobius All-Star Battle Extravaganza, offered in April 2019.

The campaign featured four teams of characters, all corresponding to an existing Ultimate Hero Job. Some of these made their debut as a playable character here.

Battles are one round, with four players against the two Heroes. Actions appear to be the same as the Ultimate Hero Jobs offers, with higher strength for the ★5 difficulty.

Defeating these heroes gains special event-only Components, tradable at the Item Exchange in the Ring of Braves for special prizes: 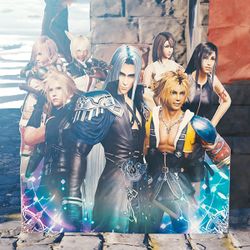 This was a special campaign posted to promote fighting the Ultimate Heroes in the Ring of Braves. If enough players defeated the Heroes during the campaign period, all players would gain rewards on Apr 25. These prizes were given for each 100,000 defeats logged during the campaign, with the maximum of 300,000 kills resulting in a final reward of

Ability Ticket x264, and so on... including 2.6 million of each skillseed!

A tally board tracking the number victories was placed next to Meia in the Ring of Braves.