Tonberry King is one of the Boss Fiends in Mobius Final Fantasy. It is a large lizard-like creature in a robe, and it carries a lantern and an extremely sharp kitchen knife. It appears as the driving force behind many of the Battle Tower events.

The Tonberries tend to play up their karmic revenge aspect, often crying that there will be Much Pain, and trying to dramatically carve kanji like "Karma" or "Vengeance" in the air, but they frequently get the kanji wrong, leading to some embarrassing moments.

A special version, the Don Tonberry, is the Dark boss for the Pleiades Lagoon, and has also appeared in the First Anniversary, Part 2. This version has a rare drop of a 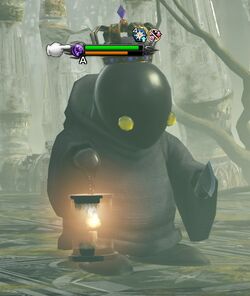 Tonberry King can appear as an enemy in the following: