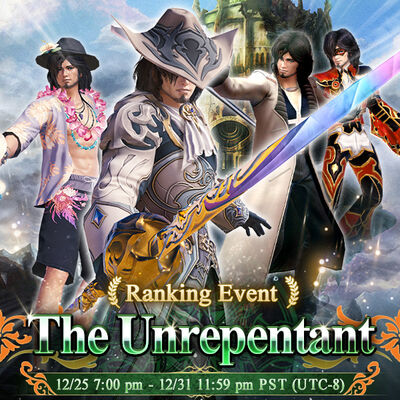 The Unrepentant is a Ranked "battle tower" event available in December 2019. It features duels with Graff, in his first set of job classes.

This is another of the "vs" progressive tower events in the Tower of Trials. You must use either Graff jobs or Ultimate Heroes to fight, but you get a better bonus using Graff-only jobs and actions. (see Gameplay) 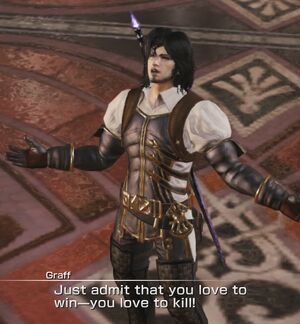 Graff steps into the Tower of Trials. As with the others, he finds a Shadow of himself there. (courtesy of Moggy we recently found out!) The shadow notes the whole need to find a personal reason to fight, including the need to respect other people's reasons... and then scoffs at the whole thing. Why not just admit you like to fight? And what better place than the Tower, where you can fight forever? How far are you willing to go?

Players in this area must use a Graff job in both the primary and secondary decks to be allowed to climb the ladder. But there is a loophole - if you use an Ultimate Hero job card, you can set any job you like to it, Graff or not. The first selection screen will only show you the job sets that meet these requirements, or you'll get a denial message if you have none. Go set up your jobs!

However, the Ultimate Heroes tend to be more overpowering, so Graff jobs don't get directly used that much. In compensation, Graff gets an

Outlaw Mode, which increases his stats by 40%! (but be aware that this buff is additive to

Every few turns Graff will switch from an Attacker role to a Defender role, and a few turns later, back again. When he does, his elemental affinity will shift, and he will switch to a different set of Abilities. (just like your own Job Change Recast)

Graff has a set of orb icons on his status bar, indicating how many elemental orbs he has. As he attacks, these will fill up, and he will use them to cast abilities at you. Hitting him with opposite element attacks will reduce the number of orbs he has.

His status bar also shows an

Ultimate Gauge. When this fills to 100, Graff will hit you with the same Ultimate Ability you'd expect for that Job. You can delay this by hitting him with non-elemental attacks while he's Broken, and during your own Mobius Zone periods.

In higher battles, the bar shows a

Counter-attack icon, with his current Cross-Counter stack. Each time you hit him, this counter will go up, making his next attack more powerful!

Finally, Graff gets a

Time Limit icon on the end of his status bar. When this reaches zero, Graff will use a super-powerful attack that will kill you. Make sure to defeat him before this hits!

The region is the standard Tower of Trials -- one path with a staircase, leading up to the top at the 50th "Ragnarok" level. You cannot return to previous levels once they've been beaten.

Upon finishing the area, you're transported to The Phantasm as your starting point into the Phantasmic Loop. This is an irreversible jump -- once you complete one of the three initial areas, you're stuck on the Phantasmic Loop with that many "completions".

The game awards the Épéiste job card to you at the beginning of the contest, maxed out, if you have not already obtained it from other sources. This guarantees that all players can participate, regardless of experience or Job collection.

Because of the holidays, participation is likely to be low, so anyone who completes all of the normal levels should make it within the top 10,000 players. The top 2,000 players will get