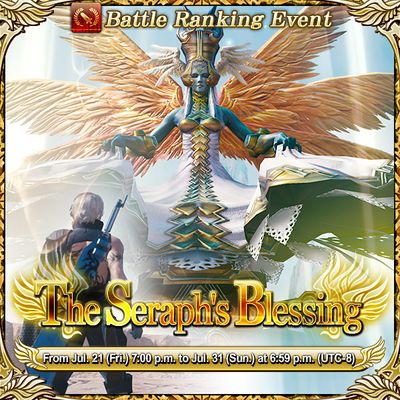 The Seraph's Blessing is a Ranked "battle tower" event available in July 2017, as part of the Collaboration Event with Final Fantasy XII: The Zodiac Age. It features solo battles against the Seraph Ultima and the Judge Magister.

After Wol beats down Ultima for the full cycle of the zodiac, Meia offers offers her congratulations and wishes Wol good fortune against all foes. The embattled blank questions this, since this seems to be exactly what Vox wants, but Meia expresses her confidence that he can prove to Vox he is the Warrior of Light, while still remaining his own man -- something that could very well upset the entire world order. Echo agrees that such a thing would be fun to see. 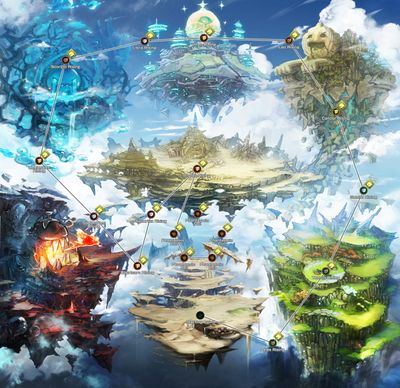 The player progresses through the first 13 "Rising" levels in a linear fashion. Levels cannot be revisited. Each level features increasingly powerful foes, including a large number of Mandragoras from the Light of the Skies event. Every level in these first 13 features Ultima, the High Seraph as the final foe.

After completing the initial 13 areas, the player enters the "Phantasmic Coil" areas. This is a set of 5 areas that repeat in an infinite loop, also with an increasing difficulty with each area finished. The 5th area of the loop (?) also features the Judge Magister as an added foe.

There are 19 areas and 14 treasure chests. Since the last treasure chest (in the Phantasmic Coil) automatically regenerates, the last chest can technically never be completed.

Ultima and the Judge Magister do not drop any cards, but other fiends do.