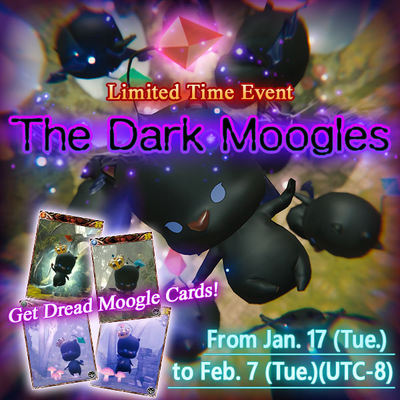 The Dark Moogles is an event in Mobius Final Fantasy and features battling 4 different type of Black Moogles. Initially offered in January 2017, it was revised with better prizes for a return visit in November 2018.

Wol comes across a poor Moogle helpless in the forest. It's Mog!? Before Wol can reach him, Echo blocks his path saying that something is very wrong. The creature rises, saying it doesn't want to be lonely anymore. With a huff, the Moogle turns black, expands to a huge size, and explodes into hundreds of smaller ones, before disappearing into the forest.

Echo suggests it's not from this world, since natives can't see or hear her -- only outsiders like Wol. But it does seem to be having a bad effect on the local Moogles. A stop into Mogheim would seem in order, but the Moogles keep a seal around the village. Wol will need to gather the

Pearl Clovers around the area to get in... and the forest is swarming with these black Moogles. Looks like there's trouble to be cleaned up. 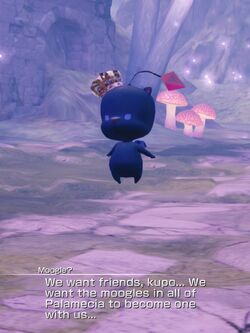 Wol is incensed that something from outside would be impersonating Moogles. Clearing out this group becomes a personal goal. The main creature shows up, talking about how lonely it is, and how it wants to become one with all the Moogles. That's more trouble. Since the Moogles have a shared group memory, if one falls, they all fall. Wol works his way through the Moogle forest, cleaning out these dark things as he goes.

At the gates of Mogheim he finds the main creature. (Echo nicknames him "MegaMoogle") The battle is swift, but short. As the creature lies defeated, it summons more of the Darkness to it... and drops to the ground, helpless! Wol rushes in, sensing that it's Mog after all. He embraces the dark thing, declaring that if it is Mog, that he should know Wol will always consider him a friend, and will never forget him. With a sigh, the darkness is expunged, leaving Mog (or at least his apparition) embraced in Wol's arms. Mog gives a Thank You before dissipating for the final time.

Wol finds a letter left behind by Mog, where he explains that as a wandering spirit he had regrets about dying so soon. Something in the Darkness felt his loneliness and yearning, and used that to get at the Light in Palamecia. He's sorry for the troubles, and wishes Wol success in his quest to be the Warrior of Light.

Afterward, Wol realises that, though the main creature is gone, all the little ones are still out there. Clearing them all out is going to take some time... 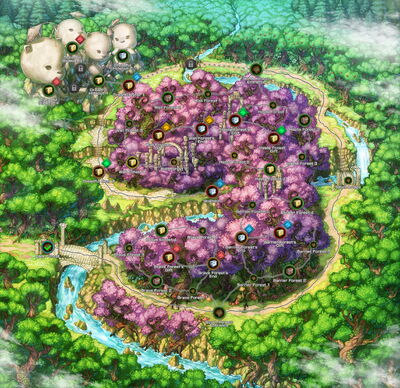 The map is broken up into 4 different areas, each with special characteristics. You're recommended to use the corresponding Ailments to remove these boons, and hit them with the opposite element for maximum damage.

Each skirmish in this region will drop one

Dark Moogles' Enchantment. These are needed to unlock the bonus Hideout areas at the end of the region. Since each of the two areas at the end need 888 of them to unlock, it's a long slog to get them open. For those making the effort, Dreadful Hideout 1 offers the most efficient gathering (6 Enchantments for 6 stamina), but takes more time. Dreadful Hideout 2 is swifter, but less efficient (54 Enchantments for 60 stamina). Given a maximum of 288 stamina in 24 hours (barring use of

Elixirs), it will likely take a week of full grinding to open both areas.

There are 39 total areas, with 23 treasure chests and 3 locked locations.