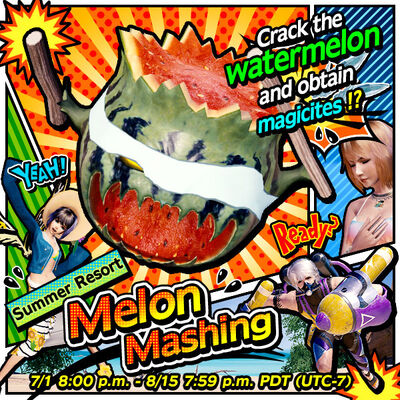 Summer Resort: Melon Mashing is a special event region from July 2018. Part of the Summer Resort event series, it offers great prizes to the player that can defeat the Melon Bombs and Straw Gigantuars.

Echo and Wol show up at the beach. Echo claims it's the Sea that pulled them here. The Sea... which dreams of Summers past and Summers to be... and wishes for people to enjoy it! Wol is suspicious and droll, as ever.

Costume change! Wol ends up in the Deep Diver outfit, while Echo gets her Mariner Echo action on. Even Meia and Sarah show up, dressed for the occasion. (in their Mellow Mermaid and Beach Queen outfits, respectively) They're not clear how they got here or what's going on, but they're rolling with it. Wol is still suspicious -- and gloomy -- but he'll play along. Who knows: he might even have some fun! 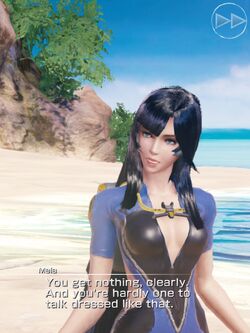 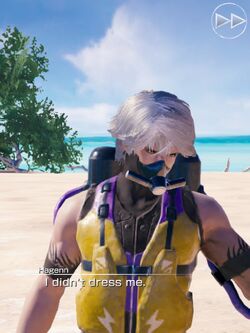 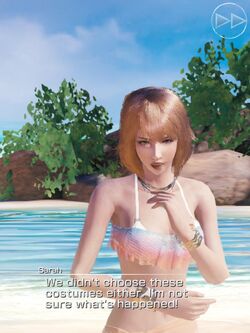 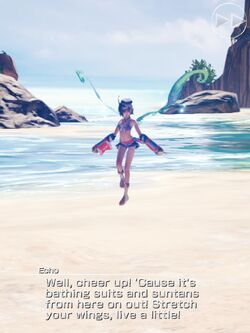 Echo tries to encourage Wol to frolic a bit. Go through the motions, at least! Chase each other around in the surf, maybe? They both have a quick visualisation of that... and it isn't pretty. Both of them agree that's an idea best dropped. 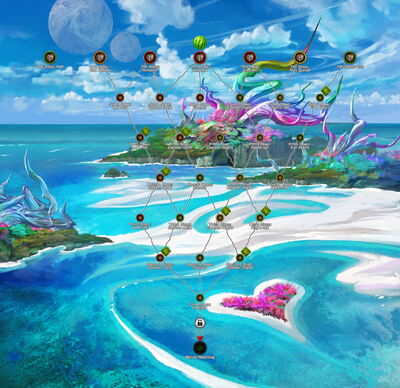 Melon Mashing Tickets upon logging in to the game during the month of July. Each ticket allows one attempt to run up the ladder of areas to the top. With luck -- or persistence -- the player will reach the center spot and "split the melon" for the Grand Prize of

Magicite x100! If not, other lesser prizes are obtained on the sides.

During play, the Melon Bombs will have various elemental affinities, and will taunt you, giving some indication (maybe) of what the correct action is. The correct one will steer the player nearer the center on the next step. An incorrect one will steer the player away, toward the left or right end. The player community has spent much time debating whether the words indicate some special attack is needed, or if it's just killing them with a their elemental weakness, or if it's all entirely random.... with no decisive conclusion. 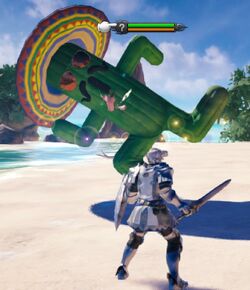 At times, the player may run into a Straw Gigantuar as well, heralded by the statement "

Gigantuars are interrupting the melon smashing! Snag Gigantuar Bulbs!" This will add an extra skirmish to the battle at that area, and offers a guaranteed drop of a

Most of the areas on the board will drop

Magicite x10 as a bonus item. In some cases they will drop Magicite x30, and in rare cases, Magicite x100. Nicely, these are NOT counted in the monthly Magicite limit, but the fiends may also drop their normal occasional Magicite x20, which ARE counted.

There are 34 areas in total, with 7 treasure chests on the end spaces. The player gets one stop on each Step, so only 7 areas (plus the start) can be hit on each complete run the player makes.

Accumulate these last three over the various Summer Resort regions to access the prize areas in Summer Resort: Diving.