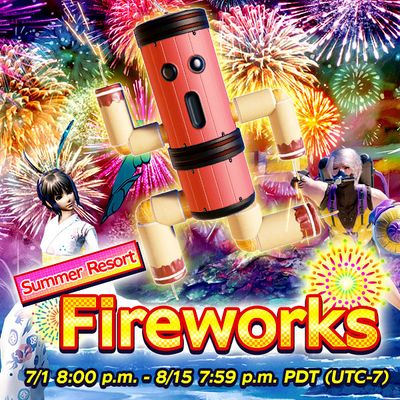 Summer Resort: Fireworks a special event region from July 2018 -- the second part of the Summer Resort event series. It offers great prizes to the player that can throw the most damage at the Firecracker Gigantuars. 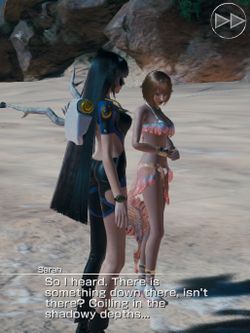 Sarah is on the beach, staring at the Sea. Meia comes up next to her and notes her trepidation. Sarah remarks that the Sea has always been a place of dark magic, and Meia agrees, mentioning her own origins there. At the same time, the shore can provide such light and happiness. It's very confusing. Perhaps the sea just helps to reflect what kind of person you are... but Sarah doesn't really know what kind of person she is.

Can the sea actually show Sarah what she truly wants? She hopes that's true. Wol newly joining them, speculates that maybe she really wants to be commoner! Sarah finds some pleasure in that thought. 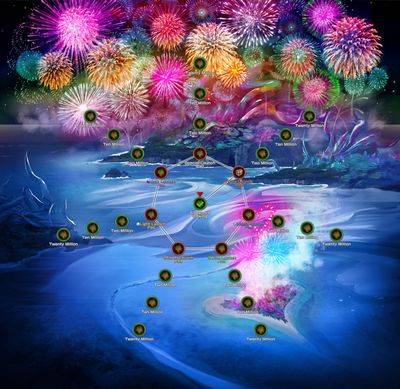 The Launch Pad areas contain one fight against the Firecracker Gigantuar: a special version of the normal Gigantuar that only casts ailments at you -- no damage. You should use whatever means you have at your disposal to cause as much damage to it as possible in three turns. (one turn for the Light version!)

Breaking the Gigantuar helps for causing massive damage, but the amount of effort it takes to break it goes exponentially up with each break. In addition, the Gigantuar will cast

Debrave at you on its second and third turns respectively, weakening your hits unless you get the ailments off. The Gigantuar has insanely high HP, and

regenerates 2 Billion HP each turn, so you will NOT be killing it.

After the battle ends, the related areas will get "fireworks" depending on how much damage you scored, and hand you their prizes accordingly.

Each of the seven spokes has a particular elemental affinity, so you must assemble a different ability set for each spoke.

Each Gigantuar throws an extra twist at you:

Curse at you each turn.
Water Launch Pad -- No ultimates!
Fire Gigantuar starts by casting

Debilitate on you, or

Slump on you, or

Break Defense Up on itself each turn.
Light Launch Pad -- Less hits!
Dark Gigantuar casts either

Slow on you each turn.
Dark Launch Pad -- move fast!
You only get one turn.
Neutral Launch Pad -- no Elemental advantage!
The Gigantuar has no elemental weakness... but you do get five turns instead of three.

The center automatically gives the player a copy of Summer Memories: Fireworks (Card), which has two important features:

As an extra item, every area here will drop a Memories component, assigned to either Echo, Sarah, or Meia, depending on what Jobs the player has equipped. The final event, Summer Resort: Diving, will open various areas with prizes for each Memories stack with over 50 pieces.

There are 36 areas in total, but only 8 of them can be visited, including the center space with the only treasure chest in the region. All other prizes are considered "story completion" rewards.