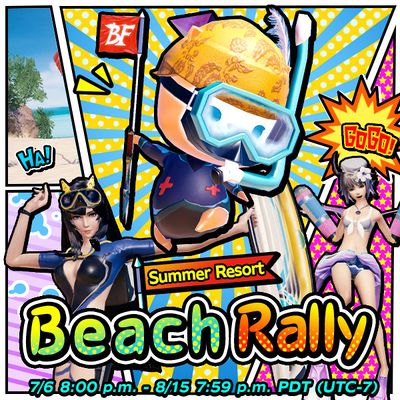 Summer Resort: Beach Rally is a special event region from July 2018 -- the third part of the Summer Resort event series. It offers prizes to those players that can most swiftly -- and accurately -- defeat their enemies. 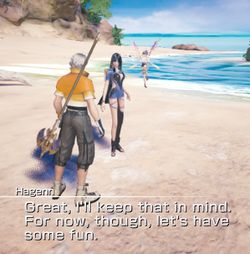 Meia comes around, asking Wol if he's enjoying himself. After all, this is leisure, and he seems to get much more enjoyment out of fighting and taking on impossible challenges. Wol disputes that, saying he fights to keep from dying. Pity... Meia is always up for a tussle. But we're here to have some fun, so let's get to it!

It's a good, swift race, but over pretty quickly. Wol wonders if it isn't a bit too boring, and Meia says that's what "Peace" is like: nothing to fight. For a world used to fighting against Chaos, life without it may prove too quiet... at which point people may come looking for a fight. Maybe against fiends, or maybe against each other. Hopefully not the latter, since even Wol couldn't keep them in line if that happens. But, says Meia, Princess Sarah might be able to. 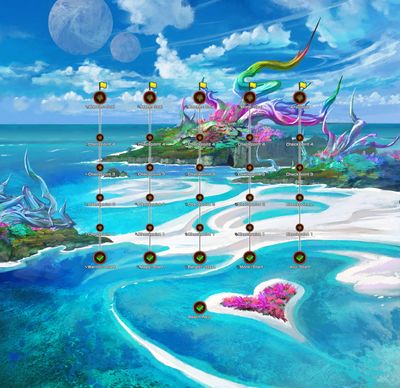 It's a race! The objective here is to get through the areas as quickly as possible. Each area has a limited number of turns. You must complete the level within that limit, or you lose the race and return to the Start. Breaking the enemies will largely be a waste of time, so concentrate on direct high-damage kills if you can. Much like the previous Fireworks region, multi-strike cards are your best friends. 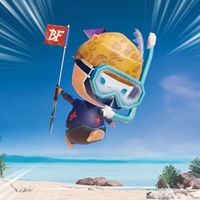 To complicate matters, you have a bystander! The Aquamoogle is watching from the, er, sidelines, where he will be hit by area attacks. Hit him for too much damage, and he'll get angry, throwing ailments at you! So you need to be careful with your area spells -- one shot with Ultima will make him totally angry! Concentrate on single-target abilities instead.

For extra help, you can pick up the Aquamoogle (Card) from the Beach Rally or any Start area. Using this card on the Aquamoogle will heal him, and make him throw Quicken on you! Depending on your supply of Ability Cards with

Haste and similar effects, this may be essential. Get out those Regalia and Orphan cards!

The region is divided up into five courses: one for each Job Class, plus a fifth Challenge course once the first four are finished.

The first course you finish awards you a Summer Memories: Beach Rally (Card). This is essential for participating in the Melon Bomb Invades multiplayer event, since it reduces the Melon Bomb's Break Gauge by about 25%. Four players with this card will put the Bomb's entire break gauge in the red, making it much easier to break and kill. Save the card... you only ever get one!

There are 31 areas total: 6 for each course, plus the starting area. There are no treasure chests in this region -- all prizes are considered Story Completion rewards.

Completing all four courses will gain you a

As an extra item, every area here will drop a Memories component, assigned to either Echo, Sarah, or Meia, depending on what Jobs the player has equipped. The final event, Summer Resort: Diving, will open various areas with prizes for each Memories stack with over 50 pieces.