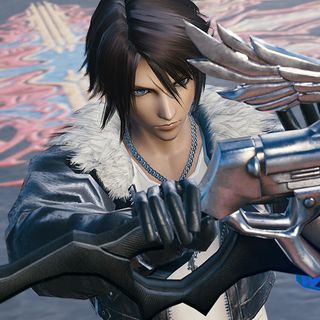 You may be looking for the character Squall, the Squall Leonhart Ultimate Hero, or other uses of Squall.

Squall shows up in the expected ★3 to ★5 difficulties, but also shows up in a new extra-hard ★5 "Legendary" form, to give the most senior players a real challenge!

Fire-based foe, with a unique playing method that parallels the Draw System used during The Sleeping Lion event.

Immune to Stun, and

Ultimate Gauge to track his own progress. This gauge increases by 5-7 with each action Squall takes. When it hits 99, Squall uses his Ultimate ability. This gauge can be decreased by Breaking him, and by hitting him with Normal Attacks while he's Broken.

skillseed multiplier of 4. Players have 30 minutes to defeat him.

skillseed multiplier of 5. Players have 40 minutes to defeat him.

skillseed multiplier of 6. Players have 40 minutes to defeat him.

Battling the "Legendary" ★5 Squall costs 30 Multiplayer Stamina, with a

skillseed multiplier of 6. Players have 40 minutes to defeat him.

This level for Squall includes an extra action: Junction. Using this, Squall can gain an un-dispellable boon, based on the Identity of the character he targets. The boon comes with a counter that decreases by 1 with each Cast he makes. The boon will disappear once the counter reaches 0.

Perfect Defense for the rest of the turn, and finishes with a Final Attack that virtually guarantees all players will die. Worry not, though, because there is no downside to dying on the last round.

At the start of each turn, Squall casts his Draw & Cast ability, immediately followed by a "Draw" action, which casts Boons and Ailments based on the Character he targets. Beware of these, for they can power up Squall considerably!

Remember that using one of the three stamps given away at the beginning of the Challenge will resurrect your character once for free!

No need to spend

Phoenix Downs if you don't have to.

Rewards for completion are only

Squall Quartz, along with a frequent

Crystal drop. The number of Quartz that drop scales up with more players, so it's always an advantage to use a full party.

In a nice twist, the rewards are NOT reduced if you get killed during the fight! Assuming you have enough Phoenix Downs (or are using a Stamp once), it pays to complete the battle.

The ★5 levels get the same material rewards, but the "Legendary" mode gives 50,00 XP! Many people are mentioning this as the greatest opportunity of the year to level up your MP Level.