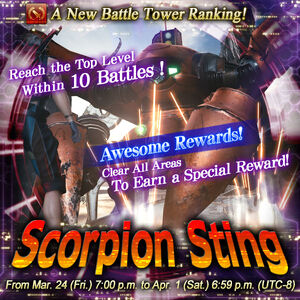 Scorpion Sting is a battle tower event available from March 24, 2017 to April 1, 2017. Unlike previous battle towers, reaching the top to unlock the Phantasmic Coil only requires 10 battles (5 floors each). It features the event fiend: Guard Scorpion Mk.0.

The map is one giant tower with 10 levels. Every level has a Guard Scorpion Mk.0 during the last battle. The difficulty increases every 10 levels. Other enemies can be found during the other battles of each levels.

There are 16 areas and 11 treasure chests.

Following the completion of "Highest Level: Ragnarok", an extra area opens called Phantasmic Coil. It repeats endlessly, but costs the same amount of Stamina each time. The Warrior of Light can not use Rental Cards or Phoenix Downs.