One for All, and All for Gilgamesh! 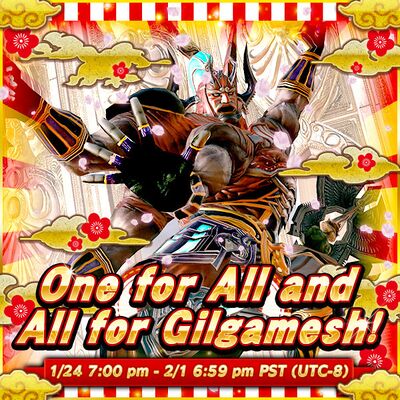 One for All, and All for Gilgamesh! is a Ranked "battle tower" event available in January 2020. It features duels against Gilgamesh, with aid from the Moonlit Masquerade jobs. The contest was originally released as the Ranked Event for the game's 4th Anniversary in Japan.

This is Gilgamesh's penultimate appearance, so the rewards are extraordinarily valuable.

The event is open for two weeks. The first week is the normal Ranked event. The second week players can continue to play it, and gain rewards for clearing areas, but the effort will not increase their ranking. 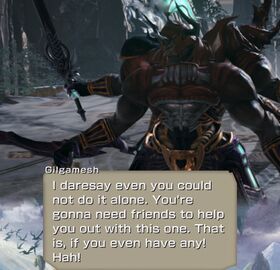 Another day, another trip to the Tower of Trials. Given the recent Anniversary celebrations, it's no surprise that Gilgamesh shows up to celebrate in his own way. Wol is a bit bored of him, especially since his intro is still the same old thing, but Wol perks up a bit when Gilgamesh mentions he brought Wol's favourite: loot!

There's a bit of a catch, though. Every time Gilgamesh loses, he'll give up some Gilgamesh Coins, which Wol can use to get stuff. But he's going to need a LOT of them. Better bring some friends along! Of course, Wol has lots of friends now, so that shouldn't be too hard.

Even Echo admits that Gilgamesh's shtick is getting old...

Each battle has three skirmishes:

Each battle will feature one of the five job classes from the Moonlit Masquerade. Depending on the amount of Ultimate Gauge you have to give, they will do a number of possible actions:

Plus, each one will throw an extra effect that weakens Gilgamesh:

The region is the standard Tower of Trials -- one path with a staircase, leading up to the top "Ragnarok" level. You cannot return to previous levels once they've been beaten.

Upon finishing the area, you're transported to The Phantasm as your starting point into the Phantasmic Loop. This is an irreversible jump -- once you complete one of the three initial areas, you're stuck on the Phantasmic Loop with that many "completions".

Gilgamesh Coins are earned by clearing each area. The total number of coins earned by ALL players in the game will be added up to unlock these areas, much like a Multiplayer "Defeat" campaign. No stamina or battles are needed to open these -- they are accessible as soon as the community accumulates enough total Coins.

By the end of the event, players had earned over 740,000 Coins, easily unlocking all of the stashes.

With the announcement of the game's shutdown in 5 months, participation may be low, so anyone who completes all of the normal levels should make it within the top 10,000 players. The top 2,000 players will get