Omega and the Azure Witch's Revenge 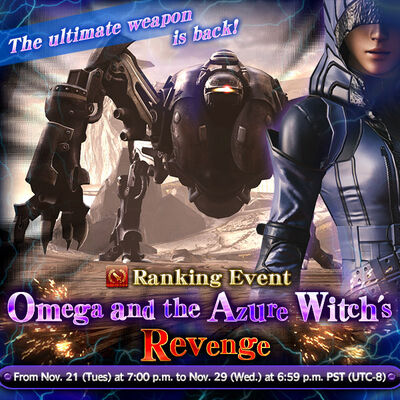 Omega and the Azure Witch's Revenge was a Ranked "battle tower" event available in November 2017, featuring solo battles against Omega (Dark). The battle is a successor of sorts to the Omega and The Azure Witch event of a year earlier. 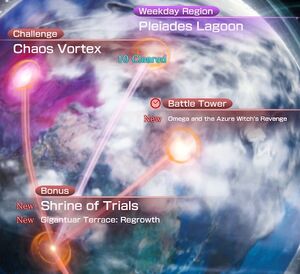 Note that this is the same storyline as from the original Omega and The Azure Witch event.

Wol returns again to the Tower of Trials, and is greeted by Vox who is thinly guised as the departed Voyd. Vox explains that a foul witch has extinguished Voyd and taken over his tower. The witch has already brough her own demons into the tower. Vox wants these demons removed and the order restored. Wol hates being used, but doesn't see much choice in the matter. 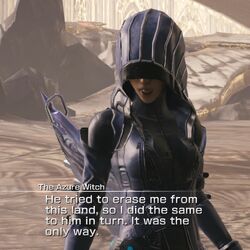 As Wol works his way up the tower, it's obvious that Vox is keen to see this woman destroyed. He's not coy about it, insisting that Wol kill her NOW. The witch, for her part, is much more circumspect. She says anyone out to kill her is her enemy, much like Voyd... but isn't prepared to declare Wol among those enemies just yet.

At the peak of the tower, the witch thanks our warrior for showing her that she needs to get stronger. In gratitude, she presents Wol with a small curse -- a kiss -- and tells him that her name is Meia. Wol will never forget her name. Echo splutters as Meia disappears, and Wol merely notes that he smells the fresh ocean tide. 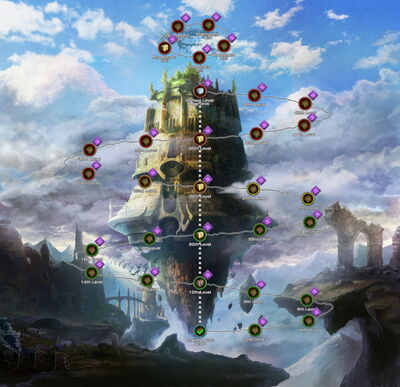 The ladder is composed of 25 steps up, with each step progressively harder than the last. There are two possible paths:

The player cannot go downward in levels on their first trip, but may teleport to any of the central column (0, 10, 20, 30, 40) once the pinnacle has been reached.

Omega (Dark) is the last foe for every area.

There are 31 total areas and 6 treasure chests. Since the last treasure chest (in the Phantasmic Coil) automatically regenerates, the region can technically never be completed.

In the Phantasmic Coil: