Omega and the Azure Witch 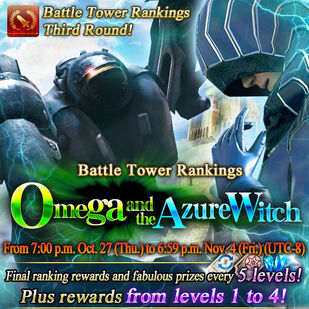 Battle Tower: Omega and The Azure Witch is an event in Mobius Final Fantasy and the sixth event temporary region released in the Global version.

The map is one giant tower with 50 levels. Every level has an Omega during the last battle. The difficulty increases every 10 levels. Other enemies can be found during the other battles of each levels.

There are 56 areas and 15 treasure chests.

Levels can not be revisited. There is a single Omega as the last battle on every level. The Omega becomes more difficult every 10 levels.