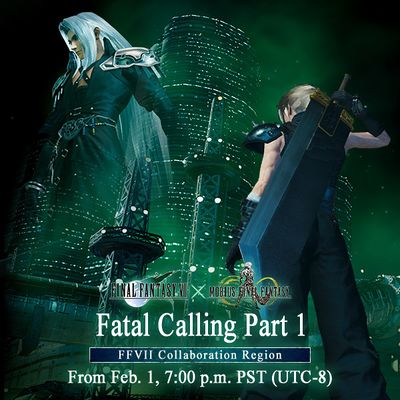 Northern Cavern is the first Region of Fatal Calling -- one of the Final Fantasy VII Collaboration Events. The story features many of the characters from Final Fantasy VII, including the return of Cloud and the introduction of Sephiroth. Progression in this region hops back and forth between seven different levels (maps), with a different fiend showcased in each set of areas. 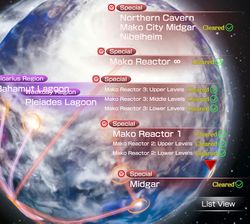 Go to the Northern Cavern region spot on the World Map -- part of the red "specials" section.
You must have completed Chapter 1: Blank Slate to get there.
It is not necessary to have played through Eclipse Contact, but it will give some background for this story.

This region makes use of the Materia System, offering extra commands during battle, and dropping Materia spheres from defeated enemies and treasure chests. See the Materia section of Fatal Calling for more details. 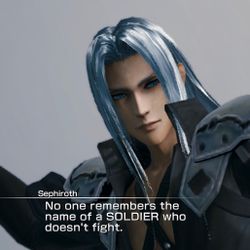 Cloud is apparently summoned to Palamecia... but by someone besides Vox. What's going on?

Wol shows up at a desolate site, to discover his old acquaintance in combat with a white-haired man wielding a very long sword. The man asks who Cloud is, and he responds that he's a former SOLDIER. Intrigued, the man declares the Law of Palamecia, and says that Cloud should prove his lineage by fighting him... then he leaves.

Wol asks who the heck that was, and Cloud says that's Sephiroth: a rival. Cloud recommends he stay as far away from Sephiroth as he can, before Cloud takes off in pursuit. But since when has Wol ever followed such sensible advice? The chase is on!

It isn't very far. Wol finds Cloud standing a the precipice of the crater, as he hold up a glowing orb that does... nothing. Cloud calls it "materia", though he's not sure how he got it. Wol suggests it might be another trick by Vox, trying to lead Cloud by the most difficult path possible. But Cloud isn't confused. If the materia isn't working, he needs to go the Mako City Midgar. He promptly leaves, with Wol following up behind. 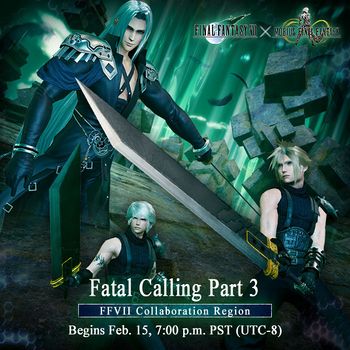 Cloud and Wol return to the ledge over the precipice, and again Cloud holds up the Giant Materia. This time the billowing black smoke clears entirely. Cloud states this is HIS fight, which gets no argument from Wol. Why, then, is Wol here? Turns out, much like in the Mako Reactors, if Sephiroth is heading for the Promised Land, Wol wants to know the way -- keeping options open, as always.

As they pick their way down the devastated crater, hopping from one destroyed layer to the next, Wol wonders what Sephiroth's Promised Land is, and what he's going to do once he's there. It may not matter, Echo says, since people that travel between worlds tend to have their memories lost, or at least heavily altered -- much like both Wol and Cloud. If Cloud were to leave, then he's likely forget all about Palamecia, and Wol, and Echo. Not such a bad thing, Cloud muses, garnishing a hurt cry from Echo. 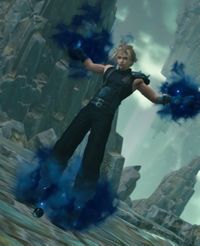 Near the end of the rubble, Sephiroth makes an appearance. Obviously the Sicariuses have not been doing the job, so he ups the game by invoking Bahamut on our heroes. A pitched battle ends, of course, with our heroes on top. Sephiroth calls up his cloud of darkness, but Cloud uses the Giant Materia to disperse it. Amused, Sephiroth reveals that the Materia was his gift to Cloud... and the mako energy it gathered was his all along. He twists the mako, and Cloud is caught fast in dark bindings! Wol rushes in to help, and gets slapped back, hard. Sephiroth declares Cloud to be his puppet, and that the time for Reunion has come. The cloud of darkness billows up again, and when it fades out both Sephiroth and Cloud are gone.

Wol is not surprised that it's Cloud that Sephiroth wanted all along. He kept that part to himself, because Cloud would never have accepted the help. Does that mean the help is over? ... No, Wol wants to see the look on Cloud's face when Wol rescues him. (Echo gets the truth: under that gruff exterior, Wol really is a good guy.)

At the core of the Cavern, Wol finds Sephiroth, with Cloud in a pile at his feet. Wol asks how they plan to leave Palamecia. Sephiroth explains that Palamecia is balanced precariously on the edge... it would only take a small push for it to be destroyed. After that, though he might be left with no memory or soul, destiny would call, and he would answer... and get to the Promised Land. There, Sephiroth and Cloud will see the Reunion through. (doesn't really explain anything, does it?)

So... Sephiroth gets his Promised Land if Palamecia is destroyed. Wol can't let that happen. 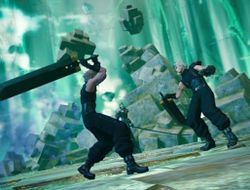 The fight is titanic, and brutal... and in the end, Wol prevails, knocking Sephiroth down. Sephiroth then tries a new tactic: having Cloud attack instead! But Wol deftly dodges Cloud's attacks and drops him within seconds. Wol looks at the prone Cloud, and says no mere puppet could defeat him. But there's every indication, he says, that this Sephiroth is not the real, undefeatable hero Cloud idolizes. Cloud could defeat this Sephiroth... if he weren't a puppet. That's enough to get Cloud to shake off Sephiroth's control, and Cloud retaliates with a vengeance.

Surprisingly, this battle is short, as Cloud manages to cut Sephiroth in half. From within Cloud's consciousness, Sephiroth congratulates him on destroying this illusion, but the time will come when Cloud must abandon all illusions and face reality. At that point, Cloud will know true pain. (and, presumably, Sephiroth again!)

Cloud looks around. His strength is gone - used up in the fight. Palamecia's a great place for training... but Cloud isn't sure it's useful, since he'd forget it all once he leaves. Not so much of a problem, Echo says, since he'll be able to fight where he ends up. Cloud picks up the Giant Materia one last time, and it transforms into the Mako Crystal that took him away last time. He'll go wherever he's needed. If he can't avoid destiny, he'll face it head-on. And that, Echo says, is the real power of hope: to turn dreams into reality. He may forget this world, but he'll never forget hope.

Cloud reaches for the crystal, and once again disappears, off to where the universe needs him next. 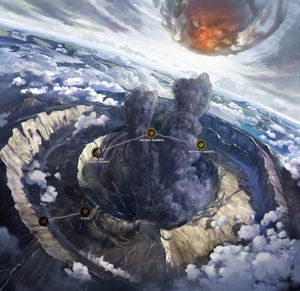 This region is fairly unique, in that it stretches across seven different maps. As the path moves along, it hits "stairs" that take the player automatically to the next map Up or Down. For sake of game flow, levels from all of the maps are listed here in the rough order they are enountered, skipping from one map to the next as the player does.

In Part 3, an extra icon appears in the corner, below the Materia button, allowing you to easily switch between the seven map levels. In each case, the player will appear at the same starting point, usually marked "LLx-1". However, if you have a Key of the Ancients (also needed to unlock various paths) then you will appear at the named area instead.

Once completed, an extra set of battles called The Lifestream opens up, progressing from the bottom Depths level up to the Surface. These feature very powerful enemies, and offer high-end rewards. (A typical hit from these fiends can exceed 16,000 HP!)

There are 94 areas in total across these maps, including 74 main areas, 13 Lifestream areas, and 7 Level Indicators. Main areas have stair levels, 50 treasure chests and 8 locked routes. Difficulty may scale depending on how strong you are, so enemies may vary from player to player.

After completion, the Lower Level 1 areas get re-activated: