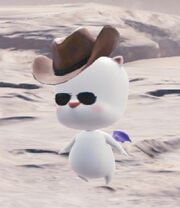 Moggy is a moogle who runs the Item Exchange in Ring of Braves. Much like the other Moogles, Moggy is small, white, and floats around. Unlike other Moogles, he also wears a Stetson cowboy hat and mirrored sunglasses.

Wol first encounters Moggy at the Moogles' holy mountain of Olympos during the Collective Limit Break, asking for Wol's help to fend off an assault by Chaos' fiends. With the help of his fellow Blanks, Wol beats the fiends away from the mountain.

Moggy then shows up as the mercantile master of the Item Exchange within the Azure Witch's Ring of Braves. From here, he offers various prizes in barter for the components that Wol and his fellow Blanks loot from the defeated Sicarians.

Moggy makes a return engagement during the Solo Limit Break, when he again needs Wol's help to defend the Olympos Foothills. But he makes it worth Wol's while, in Skillseeds and loot.

No great surprise, then, when Moggy asks Wol to pose as a Sky Pirate during the Light of the Skies event, and both Wol and Moggy make a substantial profit in challenging the Mandragoras there.

Moggy has a stronger personality than other Moogles, including a midwestern accent and a definite swagger. There's no humility here, though like all Moogles he does still refer to Wol as "Master." Moggy has an eloquent way about him, but also a great amount of skill in rephrasing circumstances to suit his own desires.