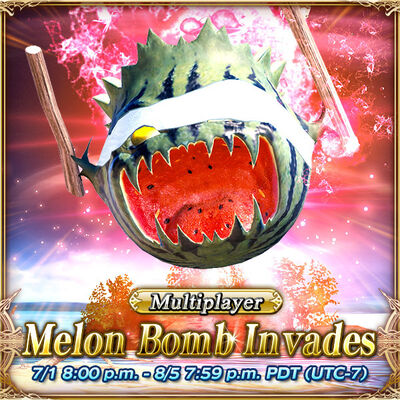 Melon Bomb Invades was a special multiplayer event, featuring battles against the Melon Bomb. The event is part of the Summer Resort event series, offered in July 2018.

These changed on a weekly basis, as the Melon Bomb's elemental affinity changed, along with the constant

Melon Fragment. Players with these components could trade them at the Item Exchange in the Ring of Braves for special prizes, offered for the week of that element, plus the week after. Once the two-week span expired, the Melon Slices would change into other components (usually Melon Fragments), and the items for that element's Slices would be removed from the Exchange.

So for example, week 1 saw the

Red Jewel★5 show up for

Fire Melon x60, which was removed after week 2. Week 2 saw the

Green Jewel★5 show up for

The run also saw these unique cards, offered only while their particular element was tradeable: 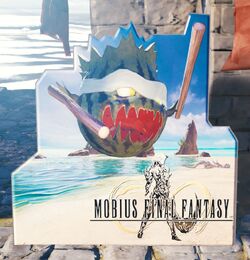