The Azure Witch Meia is a character in Mobius Final Fantasy.

A mysterious figure who resides in the Ring of Braves and challenges Wol and other Blanks to fight Palamecia's powerful elemental guardians, the Sicarius.

Similar to Garland, Meia identifies herself as a heretic and therefore she opposes the will of Vox.

While her exact nature and goals are unclear, the violent response of the Sicarius towards her, and Echo's comments that she is "a witch who threatens the order of the world" suggest she may be using the power of the defeated Sicarius for personal gain. One possible demonstration of this is her seeming control over the monsters of the Tower of Trials, specifically Dahaka and Omega.

Her first appearance was during Dahaka Assault as the Azure Witch, where she seemingly kills the Tower of Trials' guardian Voyd, and takes over management of the Tower. Wol finally encounters her at the top of the tower, but before he can get any closer she summons Dahaka and vanishes.

She follows this with the challenge of Omega during Omega and The Azure Witch, during which she spends time sizing up Wol as a possible fellow Heretic. After Wol defeats Omega for the final time, she "curses" him with a kiss and tells him her name -- Meia -- a name he will never forget.

Subsequently, Meia opens the Ring of Braves as a place to openly challenge the Sicarius, and to help the prospective Warriors of Light grow. She gives up management of the Tower of Trials, allowing Echo to take it over in her place.

Using some of her undefined powers, Meia is also making Wol revisit the locations on his journey, but is keeping it interesting by adding more powerful foes to battle.

Meia is a manipulative figure in Palamecia, convincing others to do her dirty work in exchange for treasure. In this regard she is very similar to Echo, even provoking a response from the latter during Wol's initial meeting with her.

Wol comments that there is a smell "like a fresh breeze from the sea" present wherever she has been.

There is a possibility that Meia is a being similar to Echo, since unlike most residents of Palamecia she is able to see and hear Wol's companion spirit. 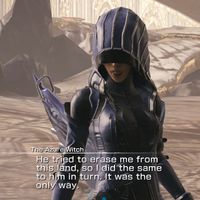 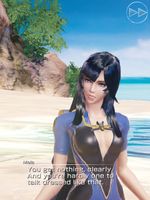 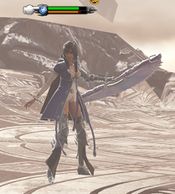