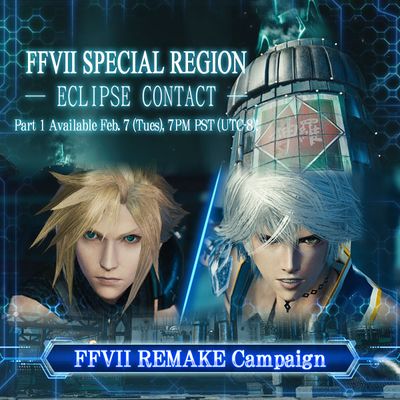 Mako Reactor 3: Middle Levels is the fifth of the dungeon regions for the Eclipse Contact event -- part of the Final Fantasy VII Collaboration Event. Players gain access here after finishing Mako Reactor 3: Upper Levels, and face off in the end against the Guard Scorpion Mk.II.

Cloud is showing some worry. What if his memories don't come back... or only half of them return? Are they even his memories at all? Wol and Echo point out that memories are notoriously unreliable anyway. Focus on the future instead. Cloud has to agree: focus on the mission at hand.

And they'll need it. The Red Alert is active again. They'll do things the new way: Cloud will keep most of the guards distracted, while Wol finds the cancel switch. Or, if Wol is up for it, he could go straight for the central space leading downward. Wol chooses discretion, and heads around the perimeter of the facility to the the Off Switch. Resistance is heavy, but Wol lays them all to waste.

As the two rendezvous before the stairs down to the Core level, Cloud finally comes right out with it. "Who am I?" (you get to choose your answer!) Wol confesses that he's the only Cloud he's ever met. He might meet another Cloud on another world, but until then this one is as real as he needs to be. Cloud is real enough, and the only one Cloud knows, so there shouldn't be any problems. 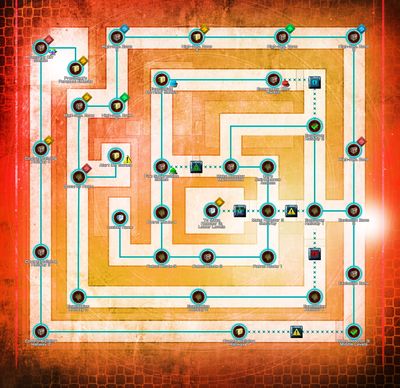 Many of the paths on this map are locked, and require specific switches to be thrown to gain access. There is also an activation of Red Alert, which causes extra sub-bosses to appear at many of the areas you visit, and for extra locks to appear. Red Alert is cancelled at one particular marked area, similar to the colored switches.

There are 35 areas in total on this map, including 23 treasure chests and 6 locked routes. Difficulty will scale depending on how strong you are, so enemies will vary from player to player.