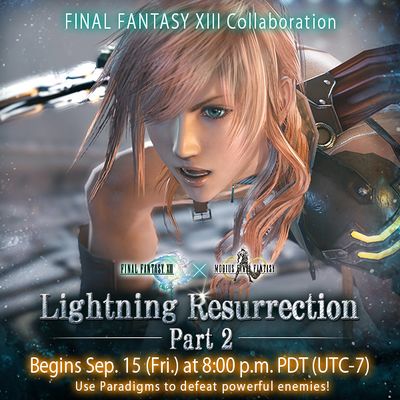 This event is continued from Lightning Resurrection, Part 1. 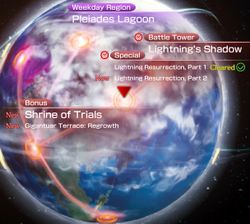 Lightning is in a fight with the Sicarius Bahamut on the tracks of the Hanging Edge, while her Eidolon Odin stands by watching. Lightning is still weak, and the fight looks to be short, but a last-second salvo from Wol saves her. She's not happy. Wol doesn't need to be following her anymore. Wol disagrees, saying she did ask for his help... and hasn't paid him yet. With a huff, Lightning accepts his company.

So why would Odin merely watch instead of helping her? Because, she says, she's not really the true Lightning. Eidolons like Odin show up to claim those consumed by despair, but she had fought back against Odin and won, making him a strong friend. She's not certain if she can do that again, against Odin or Bahamut, but sees no other way to get her strength back.

Wol keeps fighting in her place, against fiends and Sicarius. It's working okay for moving them forward, but it's questionable about actually solving the problem: Lightning will have to fight for herself in the end. And there's more than despair here. Despair is just a quick way to die, as Wol has seen in Palamecia. There's an inner light that drives a person forward in spite of despair... but Lightning doesn't know where her light went. Perhaps that's the key. 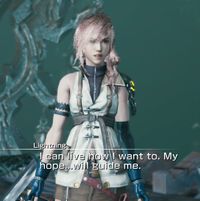 With Odin's next fight, Lightning insists on doing it alone -- no help. Reluctantly, Wol complies. But it's a short time until Lightning lies defeated and despondent. Going against orders, Wol blocks the killing blow, yelling that it's hope that has kept her going. With a shock, Lightning realizes he's right -- it was hope. Wol knocks Odin out, and Odin acknowledges the change by giving Lightning a new Eidolith crystal.

That leaves one last thing: Wol's reward. Wol asks to see her strength... by fighting him! She readily agrees, since she's been itching to fight something. It's a titanic battle, but Wol gains the upper hand. It looks to be over, until Lightning counters with a super-powerful attack series that lays Wol flat. Wol is elated at the fight, and marvels that he ever thought he had a chance against someone fated to challenge the Gods.

And with that, Wol has fulfilled this part of the Prophecy: Lightning is free -- to go wherever and do whatever she wishes. She's thankful for the help, and offers a final thought: don't get too caught up in the challenge of the future. Let it come in its own time. She climbs atop Odin and disappears back to her own world. Maybe she'll see Palamecia again. Only time will tell. 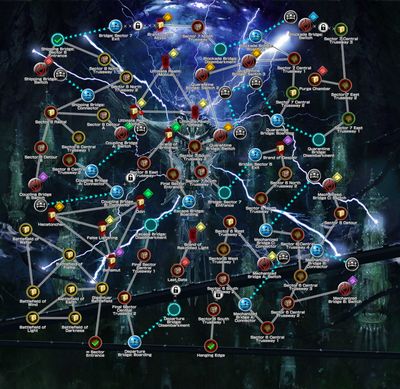 There are 90 areas in total across three Sectors and two loops, including bridges (one-way routes), switches (locked routes), and 35 treasure chests.

Once the player finishes Sectors 6, 7, 8 and Final, extra areas open up.

The region is paired with Crystarium II, which contains further upgrades for Wol's paradigms. You can access the Crystarium by clicking the blue

CP icon in the corner of the Map.

The area contains a number of new mechanics and obstacles during play in this region:

The Sicariuses in this section are particularly hard. On opening, they will cast their main ability, wiping out 90% of your health on the spot, and then cast

Break Immunity for 3 turns. You'll need to have 3 Sentinel Paradigms in reserve -- or a very good set of healing abilities -- to endure this. Once those 3 turns are over, the fight becomes much easier.

Once the player finishes Sectors 6, 7, 8 and Final, areas with special rewards gain boss marks to point them out:

Note that these are not all the special areas! Extras were added on the May 2018 event to include Scrolls for the April 2018 Vesna Krasna batch: