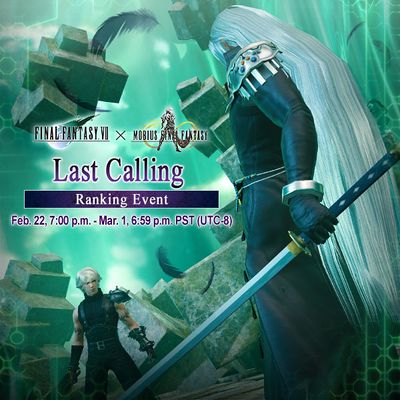 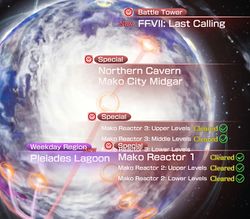 After the events of Fatal Calling, Wol shows up back at the Northern Cavern to find Sephiroth waiting for him. Despite Echo's panic, Wol leaps straight into the fray... and Sephiroth disperses in a cloud of black feathers at the first strike. So... not the real Sephiroth, but an echo of the real one's presence; possibly a result of Palamecia's uniquely adversarial nature. This will need to be cleaned out.

After eliminating a few, er, echoes, Echo asks how it feels to take on THE Sephiroth. Wol isn’t particularly satisfied, since these are weak copies. Why bother if they aren’t strong enough to win? But at least he still gets to complain, says Echo.

Echo gets a brilliant idea: a picture of Wol fighting Sephiroth! Well, fake Seph, but who'd know the difference? Or maybe a picture with Seph and Echo... or maybe a selfie that Seph can share with his fans!? Wol has no idea what she’s talking about. 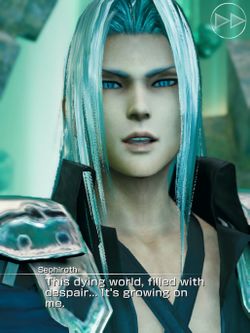 And how does he wield such a long sword? Never mind using it, how does he draw it? Let's just say it takes a great swordsman... and Wol includes himself amongst that number.

But at the end of the path, Sephiroth offers a strong verbal challenge... and Wol stops. Our hero recognizes that he's still far outclassed by the champion of despair. If this is still a copy, Wol shudders to think of what kind of power the real one can muster. This Sephiroth comments that Palamecia is growing on him. He'll stick around a while.... and vanishes in a puff of darkness. Ultimate showdowns will have to wait for another time. 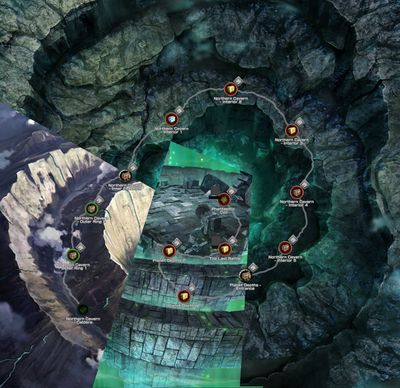 The original Feb 2018 event allowed use of Materia commands, giving an extra set of up to 6 actions that could be used in this conflict. Depending on how much materia the player has gathered in Fatal Calling, these can be major spells.... and these were essential for victory once the player reached the final areas of the map. Subsequent appearances dropped the Materia use (and re-balanced difficulties), allowing anyone to participate.

The progression is a linear one on this event, going from the outer surface down and in to the central space amongst the Planet Depths. Along the way, the player will change maps twice, but the progression maintains a single path. Enemies along the way comprise a comprehensive medley of the enemies from Fatal Calling, as well as both the current and original enemies from Eclipse Contact. Each area finishes with a solo fight against

Sephiroth Copy. As in other ranked events, Sephiroth starts out very easy to beat, but gets progressively harder with each victory.

Clearing an area also drops a Sephiroth Copy (Card), useful to upgrade the Sephiroth: DISSIDIA FF (Card) handed over as a gift at the beginning of the FFVII Campaign. The player can teleport back to previously completed areas at any time. Since only the areas on the current map are visible, the player must again defeat the transitional areas to switch to the previous maps. Repeating previously cleared areas will earn more cards, but does not increase the player's kill count or ranking.

After completing The Last Battle , the player enters the Phantasmic Coil areas. This is a set of 4 areas that repeat in an infinite loop, also with an increasing difficulty with each area finished. Players here do not get a fifth "rental" card, and cannot use

Phoenix Down to revive if defeated. Each cycle through the 4 Phantasmic Coil areas will get a reward of

There are 17 total areas and 13 treasure chests. Since the last treasure chest (in the Phantasmic Coil) automatically regenerates, the last chest can technically never be completed.

Starting with the Planet Depths - Entrance area, Sephiroth gets a pre-emptive casting of Heartless Angel, dropping you to 1 HP. Immediate heals are necessary if you hope to withstand his first onslaught, and it's pointless to heal yourself to full HP before entering the final skirmish against him. Healing boons are useful, though.

Starting with Planet Depths 2, the Proto-SOLDIERs get a pre-emptive hit with their elemental Ray spells, then cast Silence on you, preventing use of any Abilities for 1 round. Materia commands can still be used. In the Dec 2018 instance, the Proto-SOLDIERs no longer applied Silence.

During the event, an extra sale was active: