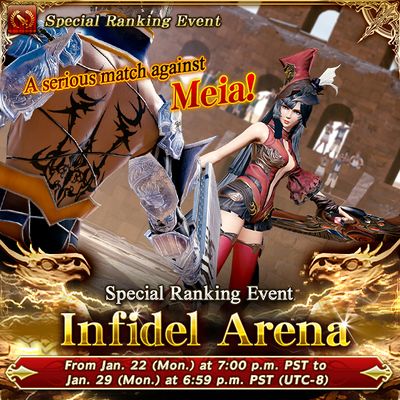 Infidel Arena is a ranked arena event in Mobius Final Fantasy. Players work through a progressive battle (Infinite Arena) competition, with prizes for players with top ranking. After the ranked competition ends, the area stayed open for three more weeks, offering players the opportunity to gather Cards for many of their existing Abilities.

It's Tournament Season! Echo has assembled the best of the prospective Warriors of Light to get their warrior on! Wol is the main contender, of course, but this time Echo has made certain he has a rival to face off against.

Wait... rival? Oh, it's Meia -- dressed in her lovely new Glam Vamp outfit. No Sicariuses this time. It's a fight against Meia herself! She loves the idea of a real test of Wol's strength.

As expected, both Wol and Meia easily rise to the Finals. Maybe also as expected, Wol proves to be the superior fighter... in every field. Meia is happy, commenting that the Warrior of Light taking down the Heretic should please the Prophecy... but maybe not so much if he becomes a Heretic himself. Meia definitely likes the idea, since Wol brings a sense of hope that could change the future of this world. A nice thought, says Wol, but he doesn't trust any aspect of this world, including her. She also notes that he has indeed gotten stronger, and he agrees, but he states he's resentful of being forced to do so.

Players start by choosing one of the four job classes: Warrior, Mage, Ranger, or Monk. The player must first go through three 3 Qualifiers which contain miscellaneous standard fiends, and finish with Shadow enemies. Upon reaching the Tournament proper, this switches to various Boss-and-SubBoss selections. The Finals features a final run-off with the Azure Witch as your foe -- with a different Job to match each of yours. Winning the competition earns a

After Victory is earned in a job class, the player can continue through the Phantasmic Coil for that class: an infinite loop of competitions against progressively stronger enemies. Like previous Phantasmic Coils, there are no Continues (Phoenix Down), and no rental cards -- you're on your own. Each win in the Phantasmic Coil gains a

Once Victory has been earned in all four job classes, and the player has at least 8 wins from the Phantasmic Coils for any job, you can go on to the Final Battlefield, where you can run a fifth tournament as Meia. 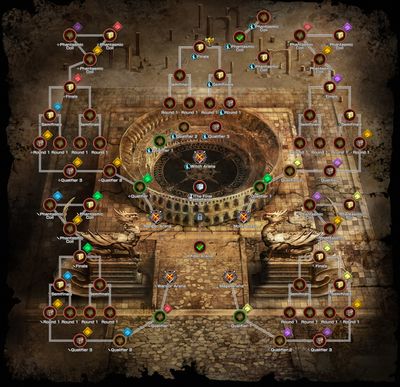 There are 72 areas in total: 4 Qualifier, 3 Tournament and 3 Phantasmic Coil areas per job, plus the Final Battlefield. 20 of the levels are Tournament progressions for the other contenders, so they cannot be visited, leaving 52 total areas to hit. 26 levels have treasure chests.

Each area completed (with the exception of the initial Arena areas) counts as a Boss Kill. At the end of the event, players are ranked world-wide based on how many Boss Kills they have, and recieve prizes on how high they place.