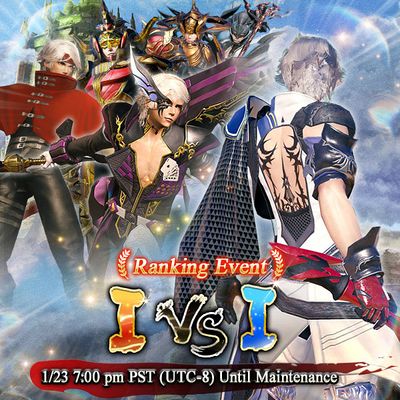 I vs. I is a Ranked battle tower event available in January 2019. It marks the first ranked event occurring in the Act 2 world, with the revised "Mobius Zone" battle system.

As a new challenge, this one requires you to battle... yourself??? The boss is Wol, in the EX Job classes, using many of the same abilities you do! 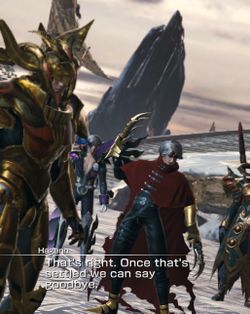 Wol shows up at the Tower of Trials on his regular rounds. Although the System of Palamecia has been destroyed, the Tower remains, stoic as ever, and waiting for those who wish to fight.

Wol finds a fairy presiding over it, but it's not his Echo. She asks if the place comforts him, and he notes there's no more reason to fight here. But the fairy disputes that, accusing Wol of preferring fighting to boredom. Perhaps... but he can see where this is going. The fairy has a new challenger for him, and tells him to revel in the glory of eternal combat. (She sounds similar to Vargas, actually.)

Quite the surprise, then, when Wol literally finds himself around the next corner! The two Wols bounce words between them about who might be the real one, and they reach swift agreement. First, that Wol -- any Wol -- is an annoying pain to talk to. Second, that this will only be settled by the winner of a fight. And then it gets weird, when four more copies of Wol show up, each in a different EX Job outfit! Only one can be the true Wol. Best get to the fighting, then...

Each area features a final confrontation with Wol in one of his recent Job outfits, decked with recent Ability Cards. These can include Supreme Cards like Yiazmat: FFXII (Cyclone), and the power ramps up fairly quickly. Add to this the new battle system, which gives the enemy an attack after only 1-2 actions of your own, and the danger is not to be underestimated.

Wol (boss) will have a set of orb icons on his status, indicating how many elemental orbs he has. As he attacks, these will fill up, and he will use them to cast abilities at you. Hitting him with opposite element attacks will reduce the number of orbs he has.

The end of his status bar also shows his Ultimate Gauge. When this fills to 100, he'll hit you with the same Ultimate Ability you'd expect for that Job. You can delay this by hitting him with non-elemental attacks while he's Broken, and during your own Mobius Zone periods.

Finally, every few turns the boss will switch from an Attacker role to a Breaker role, and a few turns later, back again. When he does, his elemental affinity will shift, and he will switch to a different set of Abilitites. (just like your own Job Change Shift)

The player progresses through the first 25 "Level" areas in a linear fashion. Each level features increasingly powerful foes. Every level in these first 25 features Wol as the final foe, in various Job forms. Areas cannot be replayed once they're cleared, and the player cannot teleport back to previous areas.

After completing the initial 25 areas, the player enters the "Phantasmic Coil" areas. This is a set of 5 areas that repeat in an infinite loop, also with an increasing difficulty with each area finished.

There are 31 total areas and 26 treasure chests. Since the last treasure chest (in the Phantasmic Coil) automatically regenerates, the region can technically never be completed.