The fiend is similar to the other Flans in the event, with a high break gauge and low HP. Unlike the other flans, this one has no offense at all! It is purely a reward creature. It comes with a

Light Pact (or similar) boon for 99 turns, but there are no other enemies from which to absorb attacks.

The standard (small) form appears for roughly 40% of the skirmishes in the Golden Flan Battlegrounds and similar special areas. This form generally drops

3,000 skillseeds of a random element.
The Giant Golden Flan shows up about 2% of the time, replacing the fiends on the last skirmish. This rare beast drops 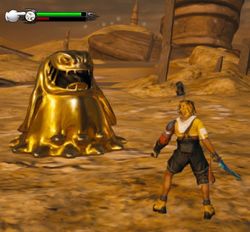 Much like other Flans, the Golden Flan will cast

Slump on you for 3 turns, if you kill with without breaking it first.

The Golden Flan shows up in: