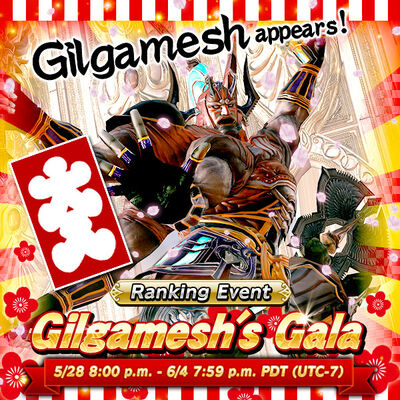 Gilgamesh's Gala was a Ranked "battle tower" event available in May 2018, featuring solo battles against Gilgamesh. The battle is a thematic successor of sorts to Gilgamesh's Challenge. which featured him in February 2017, but with new tricks up his sleeves.

Wol and Echo are circling through the Tower of Trials when they hear the telltale sounds of Gilgamesh returning. Both of them are tired of his overbearing antics, but they let him finish his (long) introduction in relative peace... if just to get it over with.

Gilgamesh has shown up to celebrate the climax of Wol's story, in his own special way.. and he's brought reinforcements! He won't say who they are, but he's looking forward to the beating they'll give. Wol gives a snarky response right back, delighting the swordsman. He paces off, in grand anticipation of Wol's arrival at the top of the tower.

Gilgamesh notes an extra for this appearance: special event cards, only obtainable here! Collect them all! Wol doesn't get it. Sure they might offer bragging rights, but who is Wol going to brag to? That knocks the swordsman back a notch. His whole shtick seems to be wearing thin on Wol, along with all of his previous long-winded stories of great Warriors of Light. Echo points out that Wol could soon be worthy of a tale of his own: the gloomiest Warrior of Light ever. 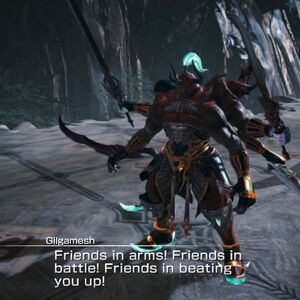 At the next landing, Gilgamesh introduces one of his new acquaintances: Ultros! The six-armed warrior is ready for a smackdown, until Ultros realizes which faerie is in front of him. He's still traumatized after his Ultros Ultimatum encounter, and refuses the fight. Gilgamesh tries to explain that he likes "older faeries", but only succeeds in catching Echo's full anger after speculating on her age. Lesson learned by Wol: less talking.

When they next meet, Wol gives his disappointment at how little "celebrating" there is going on. How about cutting to the main event? Gilgamesh refuses, but ups things a notch with his next guest: Typhon! Together, the three will teach this youngster a proper lesson in heroism. Fine by Wol -- he'll beat them all down.

At the top, Wol asks Gilgamesh if he'll make it: be a Warrior of Light. Not a chance, says the swordsman. Wol just doesn't have the desire to be the Warrior, and that's essential. Still, he can either lose and end there, or win against Chaos and end there. So maybe it just takes a will not to lose. Good enough. With Wol's final victory over Gilgamesh and his war party, the swordman admits that none of the Warriors of Light were particularly straight-up. Each had his own problems, and in the end overcame them to succeed.

Gilgamesh looks forward to the day that Wol reaches his pinnacle... so that he can come back and steal all of Wol's stuff! And with that, he disappears back into the Rift.

Gilgamesh brings two new aspects to his play this time.

1) First, while Gilgamesh himself has

no elemental affiinity, his six weapons do! Each hit with one of those weapons will strike with an element, as well as an associated Ailment. However, if you have an Element Drive offering protection in an element, he will not attack with that weapon, and you won't be at risk for that ailment.

Dark element associated with Gilgamesh's attacks, but he also has no weakness to it.

2) Second, Gilgamesh will occasionally use a new ability: Spare Change?, in which he will throw

Magicite at you... and you get to keep it! (assuming you win, of course) He'll only use this once per battle, and once per set of areas in the Phantasmic Loop, but these are outside of the normal Magicite collection limitations. At higher levels (Level 42 and above) he will gain

Perfect Defense when he hits 1 HP, then cast Ultimeh - Spare Change? as his last act. 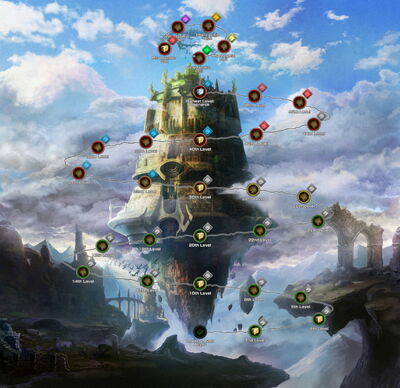 The ladder is composed of 25 steps up, with each step progressively harder than the last.

Gilgamesh is the last foe for every area.

On high Levels, the Shadow fiends will start by casting Kill the Heretic! which gives you

Slow at the very beginning of the battle. On high Levels they will also attack first.

There are 31 total areas and 8 treasure chests. Since the last treasure chest (in the Phantasmic Coil) automatically regenerates, the region can technically never be completed.

Along with the treasure chests, Gilgamesh also drops in five new forms as "Ultimeh" abilities. (and you thought Excalipoor was the end of it) These new cards are:

See the Table of Ability Cards, or the individual cards, for more information.

At the beginning of battle, Gilgamesh "throws"

Magicite at you, causing minor damage, but leaving you with the Magicite! First time only, though.

You can also find the occasional fiend card, as well as: