Dream Within a Dream - prologue 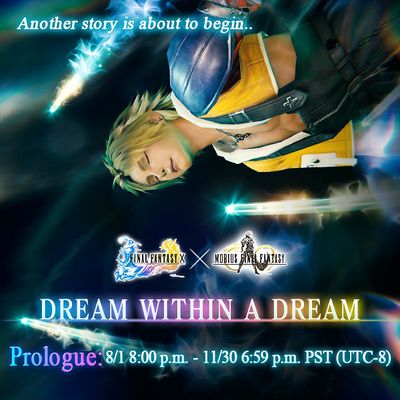 Dream Within a Dream - prologue is the opening act of the Final Fantasy X Collaboration Event. It features the adventures of Tidus from Final Fantasy X as he explores the world of Palamecia, under the guidance of Wol. 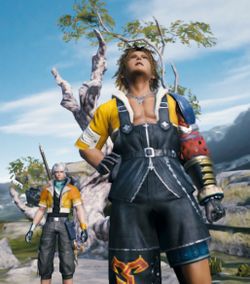 A new spirit drifts to Palamecia from out of the multiverse... a blonde teen with a colorful outfit. He appears on the shores of the Primordia, in the same place that the Blanks have appeared for so very long. Waking, he looks around, and is a bit disappointed that THIS is where he ended up -- a long way from home. It's a very short time before one of the usual fiends finds him, and takes a strike at him. Not good, since he has no weapons. But this time, a friendly platinum-haired man stops the blow, and gives lesson number one: "None shall remember the names of those who do not fight."

The youth is surprised this isn't the Farplane: the place people go after they've died. Wol assures him not, though it sounds like the youth remembers his past... and his name??? um... er... huh. No. Just like all the other Blanks. But Wol hands him a Blitzball that washed up beside him, and there's a signature on it: Tidus. Good enough. 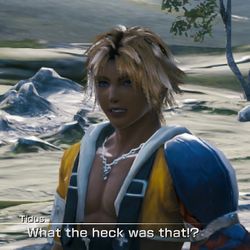 Wol asks about any words from Vox, but Tidus apparently didn't hear anything from him... and Tidus' sword is missing. This is odd, but Wol will keep him safe until they figure something out. He gives Tidus a primer on Palamecia: fighting, loss of memories, the Warrior of Light etc. How the land is changing around them, and the land is changing them, too. [[Echo (Character}|Echo]] appears for a few seconds, saying that's the way of Palamecia, and her appearance freaks Tidus out. So... he can see Wol's Echo... another way he's different from the usual Blanks. Perhaps the local Crystal has some answers.

Their path is blocked by a rampaging Cockatrice. (oh, not AGAIN) Tidus wonders if they could save time by going around it, but suspects that it's a trial that they will be forced to face. Wol is impressed: he catches on fast. It's a short trip to find the bird and remove it, but that doesn't seem to be the real problem. The Runic Temple is locked... with a Sphere lock?? Tidus definitely isn't the only thing to have arrived from Spira.

The spheres, are, of course, in the hands of Flans -- from Spira -- and it takes a while to find them all. As they go, Wol gives Tidus more advice about how unsympathetic this land is, but Tidus only takes it as a lecture. Like it or not, Tidus has to follow Wol's directions until he figures out what's going on in this world. Wol does mention that he's hoping for a way to help Tidus return to his world, and possibly give Wol a way off of this one. But Tidus has no interest in returning to Spira -- that story is done. 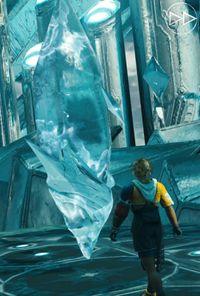 This Warrior of Light, though, sounds interesting. A task that many who come to this world relish to accomplish... though Wol is gruff about it, saying he's just trying to stay alive. Could Tidus be one? Echo is stumped. That's up to the Crystal, presumably, or whatever other fates are in charge here.

The two warriors sweep the landscape, and gather enough spheres to unseal the Runic Temple. Inside, Tidus touches the Crystal... and they're transported to a city of endless lights. Zanarkand, Tidus says. His home, and the place he can never return to. So why is the Crystal showing this to him? And what does it mean for his future?

To be continued in Dream Within a Dream, Part 1 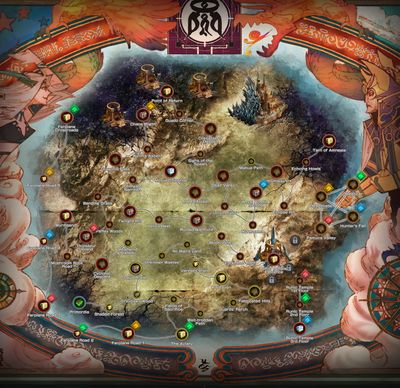 Beginning routes closely mirror your own journey in Chapter 1: Blank Slate, until variances in the story take things in a new direction. There are 58 areas in total, including 23 treasure chests.

Once you've completed the main quest, a side quest opens up to progress along the Farplane Road, against increasingly powerful sets of Flans. Clearing these levels nets you

Sphere of Sealing and

Sphere of Destruction, which you can use at the end to unlock a set of areas that drop Scrolls for the Early August 2018 Summons Batch.