Dream Within a Dream - Conclusion 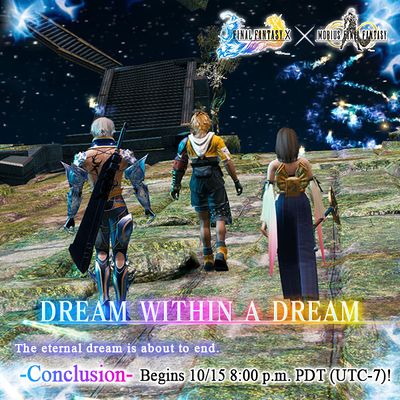 Dream Within a Dream - Conclusion: A Fleeting Dream is the final story chapter for the Final Fantasy X Collaboration Event. It features Tidus and Yuna from Final Fantasy X returning to Zanarkand (or Palamecia's equivalent) looking for a way back to their home of Spira.

Continued from Dream Within a Dream, Part 4

Tidus and Yuna have arrived back in the ruins of Zanarkand -- which we left in Episode 2 -- with Wol and Echo tagging along. Somewhere in this space might be a way back to Spira. Tidus seems intent on getting Yuna there, while expecting that there is no role left for him in Spira. However, Tidus is unaware that this is not the real Yuna, and her intent is to get him back to Spira without her.

When last we were here, a barrier was blocking the entrance to the main Blitzball Dome. Seems like a good place to start. Sure enough, the barrier is still there, but a wave of Yuna's hand makes the barrier fall. Apparently it's a summoner thing. This was the final destination for summoners in Spira, after all. Only worthy summoners could pass. The party step through into the Farplane.

The Farplane is rife with pyreflies. Yuna explains that they absorb and react to the thoughts of people around them. She asks for a boon, and the pyreflies conjure a Crystal for Tidus, but it's dim. If Tidus can fill it with the Light of Hope, then it will guide them to Spira. So the objective will be to find enough pyreflies.

While Wol is handling the inevitable Trials in their path, Tidus gets an idea, and dashes off on his own. If he can kill the fiends in his way, it increases his own hope, and the pyreflies will respond in kind. It seems to work -- the Crystal is getting brighter.

Go to the Sphere Grid through this control.

This shows the list of Spheres you've collected, that have not been activated yet.

Shows you the effects of everything you currently have activated. Use the icons on the top bar to switch between your character enhancements and the Aeon enhancements, or filter between different enhancement types.

Lists the Aeons you have available, and shows their total attributes.

This region continues the Summoning System. The Sub-deck that normally holds your second (backup) job is replaced by one of the Aeons from Final Fantasy X. 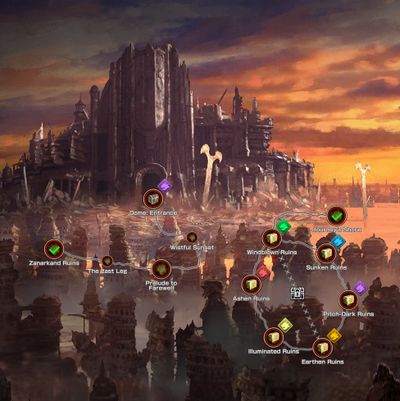 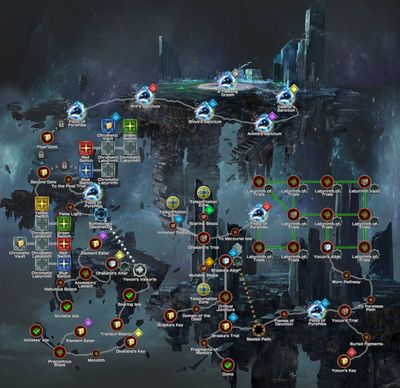 As you traverse the region, you'll receive Spheres as a reward, which you can use in the Sphere Grid and Aeon Sphere Grid to enhance stats and add extra Auto-Abilities. The fiends will get stronger to compensate for that, so be prepared for some heavy fighting!

There are 88 areas in total, with 28 treasure chests.

Each of the trials in this region has you looking for a Key, which will open the way to the exit. In each trial, you will run into Pure Elementals that will lock out their opposite element. However, if you have the Aeon for that element selected, then summoning that Aeon will immediately remove the lockout... and the Aeon can load a large amount of damage on them with its counter-element!

At the end of each labyrinth is a Vault with treasures, protected by amazingly strong fiends. Seriously, don't attempt this one until the current labyrinth is complete, unless you're looking for a severe top-end challenge.

Once the story is complete, you are transported back to Zanarkand. If you wish to go back to the Farplane, teleport to the Dome:Entrance area. If for some reason you missed upgrading your copy of Tidus & Yuna: FFX (Card) to ★5, you can go back to the

In Zanarkand, there are 6 extra areas that drop

Pendulums as prizes. Use these to open the chest in the center of the field for

Yojimbo Spheres and other prizes.

Each run through these six areas will always drop

Pendulum x20, alongside any

Pendulums can be turned in at the center chest for these rewards, in order:

Once the six Ruins spaces are cleared, they change into Golden Flan Battlegrounds areas! Like the area seen in Episode 1 and Episode 3, these areas are populated with Cactuars, Metal Cactuars, Gold Cactuars, Crystal Gigantuars, and Golden Flans. New to this region, though, is that they're isolated to one of the six single elements, so you can gather

Skillseeds in exactly the element you wish!

These items are gathered to unlock spaces on the Sphere Grid and Aeon Sphere Grid.

These items unlock paths in the Farplane: