Dream Within a Dream, Part 2 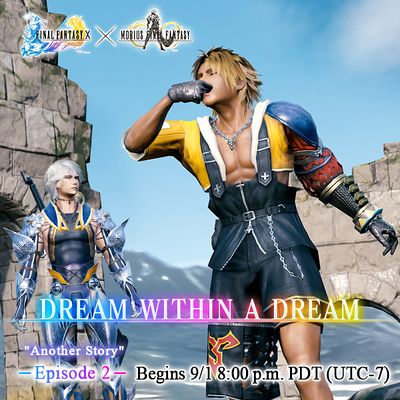 Dream Within a Dream, Part 2 or Episode 2, is the second main story chapter for the Final Fantasy X Collaboration Event. It features Tidus from Final Fantasy X returning to the Plains of Cornelia to follow the initial steps to be the Warrior of Light, while Wol keeps a watchful eye on him.

Continued from Dream Within a Dream, Part 1 and FFX Blitzball

Tidus reflects on his sudden appearance in the world of Palamecia, similar to his sudden appearance in Spira. It's a tough road, but it seem to be the obvious choice, if not the only choice: Do as Palamecians would do... and that means to become the Warrior of Light! Tidus' eagerness amuses Wol and thrills Echo. This kid could become Vox's favorite! Except he hasn't heard a peep from Vox. How very strange.

First need is strength training, so back to the Plains of Cornelia we go!

It doesn't take long to reach the first trial there: Trial by Combat. Tidus is anxious to get moving, so he offers a competition: which of the two can bag monsters the fastest? Wol is obviously the better of the two, but it gets worrying when they find Tidus' Brotherhood sword cast aside. Wol does a bit of searching and finds Tidus is okay. He had to run from a stronger monster, and lost his sword in the process. Luckily, he found a Survival Knife to tide him over. Wol scolds him, which makes Tidus smile: the veteran is gruff, but underneath it he really cares... much like someone else Tidus knew.

The second trial comes as tests of skill... or endurance, if skill isn't enough. Tidus still shows the same eagerness, talking about how a battle is much like a Blitzball match. Watch your own team, watch the opposite team, hang back if it's too much, and strike when your advantage is best. Wol respects that, but he'll stick to his own methods. He lets Tidus lead the way. It's a close contest, but Tidus emerges on the other end first. 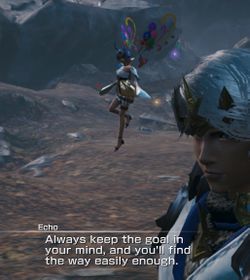 Wol reminds Tidus that if being the Warrior of Light is his intent, then a competition like this is just a distraction. What should he be aiming for, then? Echo says that he has to decide his own goal. Its gives Tidus something to think about: what does he really want? It doesn't take him long to reach the simple answer: to become the Warrior of Light and save Palamecia! (sigh.) In his enthusiasm, Tidus suggests to Wol that if they get separated, he can just whistle... which trips a memory of saying that same thing to Yuna in Spira. He's left somber by the memory, and he won't talk about it.

Just as well, because another trial appears: the plains are on fire! It's pretty clear that Palamecia is doing it again, forcing our heroes to overcome more obstacles. It's confusing and taxing, but the two get the job done, and put the fire out.

Throughout it all, Tidus just keeps on fighting, long after showing signs of fatigue. Echo and Wol both recommend that Tidus get some rest, or he'll burn himself out. It's dismaying, until Wol realizes that's the point: Tidus wants to burn himself out. He's not trying to get stronger or move forward in being the Warrior of Light, he wants to lose himself in battle. He wants to use battle to help him forget about Spira. Confronted with this, Tidus admits it's true.

Tidus is still unwilling to explain, but the conversation is cut short by the arrival of a trusted friend... from Spira! Not so friendly, though, as it attacks them. Wol leaps forward and defends against the creature, knocking it down, and in doing so seems to break it out of its aggression. It calls to Tidus, and when he meets the creature it explodes into a swarm of pyreflies... then the two of them vanish entirely.

In the void between the worlds, Tidus awakens, on the way to... somewhere else? There are pyreflies here, too, and they coalesce into the visage of Yuna, his partner from Spira. He reaches for her, but she doesn't respond. He whistles for her, like the two of them had agreed in a previous life, and the pyreflies separate again.

Tidus whites out, and awakes... floating in the sea, just off an island. He looks around, stunned. It looks like Spira. A blitzball hits him in the head, and he turns around to find Yuna standing at the shore.

Continued in Dream Within a Dream, Part 3. 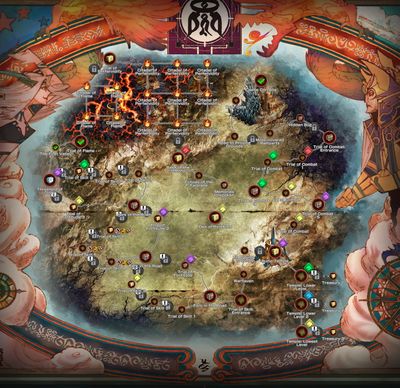 The region offers up a new extension: the Sphere Grid. As you traverse the region, you'll recieve Spheres as a reward, which you can use to enhance your stats and add extra Auto-Abilities. The fiends will get stronger to compensate for that, so be prepared for some heavy fighting! At the top of the region map is the button to go over to the Sphere Grid. Just under that is a gold button that brings up the current list of the sphere's you've collected, minus ones you've already activated on the Grid.

The region has three more trials to complete:

The event's return in 2020 reduced the number on these to a small fraction, so the Fortitude areas can now be finished in a single attempt.

No more guessing required! The 2020 return event now marks the correct trail in red! Follow it directly to your rewards. Also, the battles are gone, so you can traverse the whole thing in no time.

There are 58 areas in total, with 22 treasure chests.

Once the region has been cleared at the end of the Den of Pyreflies area, two bonus options open:

These items are gathered to unlock spaces on the Sphere Grid.