Dream Within a Dream, Part 1 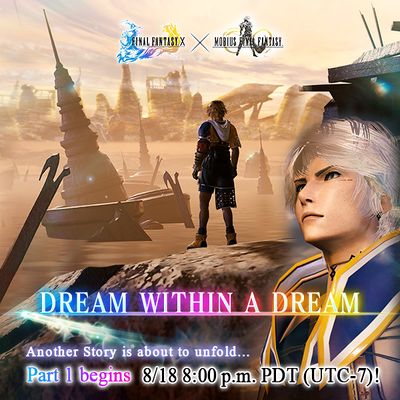 Dream Within a Dream, Part 1 or Episode 1, is the first main story chapter for the Final Fantasy X Collaboration Event. It features Tidus from Final Fantasy X working out how his home city of Zanarkand fits in this new world of Palamecia.

Continued from Dream Within a Dream - prologue 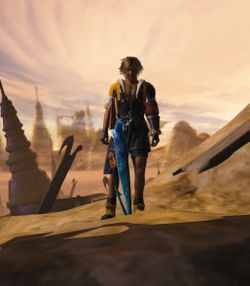 Tidus and Wol have followed clues from the Cornelian Crystal, and they have found Zanarkand! But it's not the bustling city that Tidus grew up in. Instead, it's the thousand-year-old ruins of cold, harsh reality. Tidus says with resignation that he -- and his Zanarkand -- are nothing more than a dream. But in the dust overlooking the city's ruins, Tidus finds his sword, the Brotherhood.

Wol wonders what happened to bring down such a glorious city. Tidus is a bit confusing in his answers about two Zanarkands. Wol suggests Tidus tell the whole story, and he agrees, while they walk through the ruins.

Tidus talks about how the great nemesis Sin shifted him from his Zanarkand to Spira. Sin was a world-destroying monster that terrorized Spira. It took the efforts of Spira's best -- the summoners -- to kill Sin, sacrificing their lives in the process. But Sin would just keep coming back after each one died. Tidus couldn't abide that, and worked with friends to find a different way. They succeeded, and stopped Sin forever, but the price of that was that Tidus' Zanarkand -- and Tidus -- disappeared along with it. Tidus made his peace with that, knowing that he could never go back to Spira or to Zanarkand. Hopefully everyone in Spira, good and bad, is enjoying the calm he helped bring to the world.

Then he woke up here in Palamecia...

Meanwhile, the path runs through a few different trials -- one requiring reading the elements and signs, one requiring swift execution, and one requiring pure, raw power. Tidus chafes a bit having to hang back, but Wol insist he gather his strength, and fill in if Wol falls. 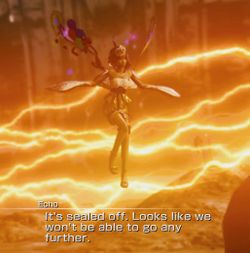 The two persevere up the ruined doors of Zanarkand's main Blitzball dome. There they find an energy barrier blocking the way. It's sealed. Tidus starts to wonder about the use of it all, but Wol stops that train of thought, saying only regret would make the trip useless. Tidus gets the point, and realizes that he's been spending too much time regretting his decisions back in Spira. He's in Palamecia now, and he'd better get used to it. So what else is there to do.... but to become the Warrior of Light! After all, this is HIS story.

Now... he's going to need to build up some strength. Is there stadium or coliseum around anywhere?

Continued in FFX Blitzball, then on to Dream Within a Dream, Part 2. 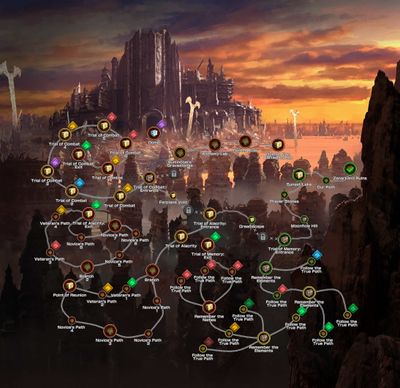 The first trial is one of memory. Each step of this section has a one-skirmish battle against a set of fiends. You'll then have a choice of areas to fight next. Choose the area that matches the elements or names you just fought. If you're right, they'll give you a Prismatic Shift, and afterward you move on to the next space. If you're wrong, then you end up at a dead end, and you have to go back.

The second trial is one of speed... and power. Kill your foes quickly, or they summon reinforcements. This works in one of two ways:

The path splits and offers a Novice's Path, with relatively easy skirmishes, and a Veteran's Path, with much tougher foes. You don't miss anything by taking only one path, but you can go back and grab the other path if you so choose.

The third trial is one of outright power. Kill these powerful foes any way you can, and come out the other side. In most respects it's like a mini-Phantasmic Loop from a Battle Tower. While individual foes have their own strategy, there's nothing special to get through this.

There are 56 areas in total, with 25 treasure chests.

Once the region has been cleared at the end of the Dome area, two bonus options open: