Dread Moogle - Fire is one of the special Event Fiends in Mobius Final Fantasy. It first appeared in The Dark Moogles, and has popped up in a few other events since. Sarah describes them as Moogles who have succumbed to despair, but Wol believes they are actually products of that despair made manifest. 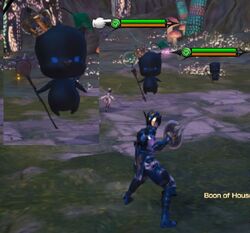 The Dread Moogle - Fire can appear as an enemy in the following locations: