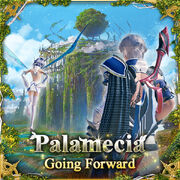 This end-content area map is released after public announcement of End of Service for MobiusFF.

The map consists of 5 floor levels:

- Level 1 (A/B) till Level 3 (A/B) - Monster Development Rooms, along with greetings/farewell wishes from members from various development departments in 5 years of MobiusFF.

By completing the map, Mobius Medal will be given to player, which allows to unlock final endgame-content that appears in Vox Encore map, allows player to challenge Vox (ver. Warrior of Dawn).