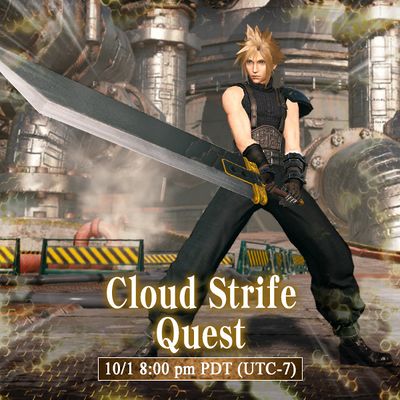 The Cloud Strife challenge was a special multiplayer event, featuring battles against Cloud (Sicarius). The event is associated with the Final Fantasy VII Collaboration Event, and was first offered in September 2019.

At ★5, Cloud starts the battle with his Omnislash ∞ Ultimate move, which may wipe out the entire party right at the start. Set up your defenses well!

At ★5 Hard Mode, Cloud is joined by

Tifa (Sicarius). You must defeat ALL THREE of them to win the fight. 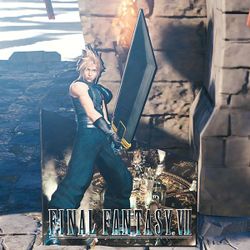 Total victories only reached 180,000, so players received only a single set of rewards.

All players who log in during October 2019 will receive:

This can be equipped in the Social Tab: Edit Stamps.

Using this stamp during a battle in the Ring of Braves will revive your character from death with no penalty. It's a free

Defeating Cloud gains special event-only Components, tradable at the Item Exchange in the Ring of Braves for special prizes:

Any Cloud Quartz you still have will be changed into other earth-based components on November 9.