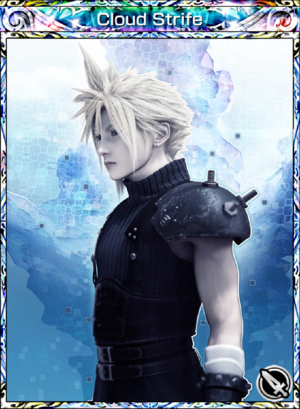 Cloud is a character from the Final Fantasy VII Collaboration Event, first appearing in February 2017. His main appearance has been as part of the Eclipse Contact special story regions. The character is a direct analogue of Cloud Strife from Final Fantasy VII.

Midgar appears in Palamecia, ringed by various Mako Reactors. Wol investigates, and runs into Cloud, who is trying to shut the reactors down. Cloud provides info about the place, explaining the need to disable the Mako Reactors as they can kill the planet by draining its lifestream. The two team up in the effort, and work their way around the eight reactors against many Security Squads and Guard Scorpions. In most circumstances it's up to Wol to clear the areas of guards and fiends, while Cloud works the switches and passwords in the background. As they battle their way through, their mutual respect and camaraderie grows from convenient indifference to a friendly sarcastic banter. 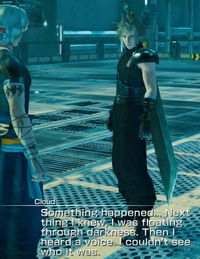 One of the crucial findings is that the Guard Scorpion mecha protecting the core of each Reactor can't be harmed by Cloud -- only Wol seems capable of doing so. Wol's companion spirit Echo initially thinks this is just one of the Laws of Palamecia coming into play, but other things seem off, too: Cloud can see and hear Echo, while normal Palamecians can't; and Cloud has no idea where he came from or how he got here.

As each Reactor gets shut down, Cloud's amnesia lifts a bit. After Mako Reactor 2 he has vague memories of working as a mercenary, then waking to find himself floating towards Palamecia. As usual, Vox tries to explain the Prophecy and the Laws of Palamecia to this new denizen, but Cloud openly expresses that he's not interested, and gives up entirely on him, leaving him to continue his fight on the space that seemed to come with him. Cloud's feelings remain disconnected, though, and he starts to doubt if he is really himself.

When Mako Reactor 3 is shut down a special crystal appears with an offer to transport Cloud back to his "home". Cloud takes it, and asks if Wol will join him. Wol refuses, saying he's not ready to leave this world yet.

However, with Cloud's departure, Midgar stays put, and Wol has to finish shutting down the remaining reactors. Echo suggests in her vague talk with Wol that this may mean Cloud is just a reflection and not the original one.

Cloud returns to Palamecia, having been called back to it by his nemesis Sephiroth. Cloud finds the two of them battling it out in a Palamecian analogue of the Northern Cavern from Cloud's home world. Cloud of course tells Wol to stay out of it, but Wol can't help himself. Cloud runs into a dark barrier, and tries to dispel it with a Giant Materia he has. It doesn't work -- there's no power in it. He heads off to Mako City Midgar to recharge it, with Wol following.

Cloud and Wol fall into a familiar pattern, as they work their way through Midgar's security systems to shut down the Mako Reactors. At each one, the Materia gets a little more power. The two of them also hear a subtle calling from deep in the reactors... 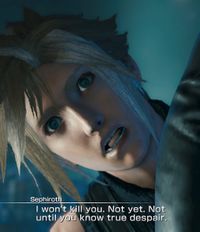 Once the reactors are down and the Materia is filled, the two of them find Sephiroth at the center of the city. The two face him, but it's obvious they're still outclassed by a master swordsman. Sephiroth drains the power from the Materia, and stabs Cloud through the chest. Sephiroth won't kill him, though, saying he hasn't learned despair yet.

A debilitated Cloud goes, at Sephiroth's suggestion, to his hometown of Nibelheim. He works his way through the area, collecting Mako energy from the scattered Jenova Pods, and remembering a bit more of his past with each one. He came to Nibelheim as a SOLDIER on his first mission, led by Sephiroth. Conditions at the prototype Mako Reactor there were terrible. By the time the problem was resolved a lot of people were dead, Cloud had vowed to put it all behind him, and Sephiroth had changed into a devotee of nihilism. As a source of despair, Cloud seems to take the memories in stride. He finds Sephiroth, but it's just an illusion. The real one is back at the Northern Cavern.

Trekking back to the Northern Cavern, Cloud follows the path down to the planet's depths, looking for a proper showdown with his nemesis, with Wol still following and helping. Halfway down, Sephiroth confronts the two heroes, and reveals that the Giant Materia was a gift of his. Through it, not only did Sephiroth get more of the power he was after, but infused enough of it into Cloud's system to allow Sephiroth to take control of Cloud... and he does, making Cloud his puppet!

Wol pursues Sephiroth and Cloud to the lowest level, where Wol accuses Sephiroth of being a poor copy. The Cloud he knows wouldn't stand to be a puppet under such a copy, and it's enough to get Cloud to break free of Sephiroth's control. The two former SOLDIERs fight a strong battle, and Cloud slices Sephiroth in half, proving it's a copy after all. But he hears a mocking voice saying that he'll have to face reality soon.

Cloud's Materia changes into the Crystal he had before, and he recognizes it's time to move on. Though he may not remember anything of Wol or Palamecia where he goes, he will remember hope and its importance. A touch of the Crystal, and Cloud is off to his next fate.

Cloud tends to be emotionless and cold, with an especially pragmatic attitude. He has no time for friends or boasting, but Wol's own matter-of-factness gives the two a common trait that forms a bond between them. 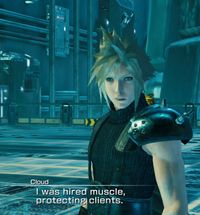 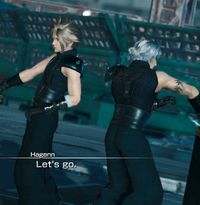 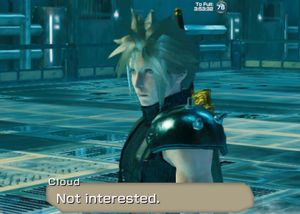