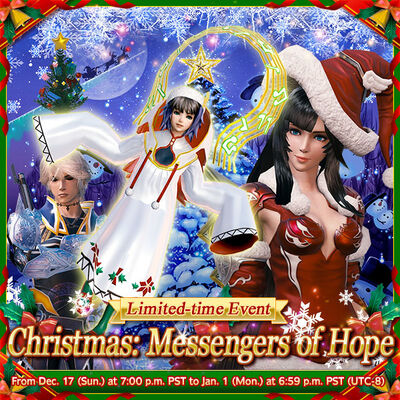 Christmas: Messengers of Hope is the main Holiday event for Mobius Final Fantasy. The event includes a dedicated story region and numerous associated gifts for logins and social media links.

This is a gift region! All fiends in this region are garbed in festive Holiday outfits, and are guaranteed to drop 10-200

Magicite. The EXP is greatly increased (over 20,000 for most areas), and despite the listed difficulty the fiends do little to no damage. 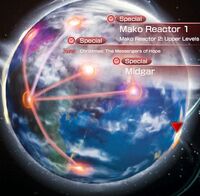 Christmas Tickets at one per day.

During the event period, all effects of Mobius Day are active, including Fusion bonus, Ability lv.2 drops, double stamina from Elixirs, +88 stamina daily, and a fully open Pleiades Lagoon.

Christmas Tickets per day for the first 3 days, to make up for the shorter period.

During the event period, all effects of Mobius Day are again active, including Fusion bonus, Ability lv.2 drops, double stamina from Elixirs, +88 stamina daily, and a fully open Pleiades Lagoon. In addition, equipping a Companion Spirit from December will also increase your Extra Skill Unlock Rate by +3.


Notable additions to the 2018 instance include a

Reduced to 10 days this time, the event dropped 2x

Christmas Tickets for the first four days, and one

Christmas Ticket on 5th day. The Growstar reward is gone, but player are gifted a Faerie Queen Echo companion spirit, which gives Improved Extra Skill Unlock +3 until the end of the year. No Mobius Day bonuses this year.

The Custom Skill cards for Santa Lucia remain in the awards. If you have previously obtained them, a duplicate card will not be provided. Instead, you will receive

Magicite x100 for each duplicate skill card (sent to your Present Box).

Wol and Meia are invited to a winter realm by Echo, who is kitted out in winter holiday wear. It's a festive feeling, and Echo spreads it by giving Meia a new outfit, and Wol a small floating tree. They have the reactions you'd expect -- Meia is amused, while Wol is slightly irked. 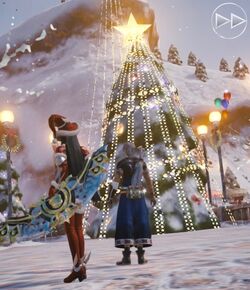 Legend, Echo says, is that a red-nosed man spends these nights each year creeping into people's houses and leaving presents. She offers up the opportunity for the pair to play the role of the red-nosed man, with the promise of great presents of their own if they do. Just one catch: they'll have to get the presents from the fiends first. Echo ups the stakes: if Wol doesn't play along, he gets to wear Meia's new dress. (!)

The work is quite easy, since the fiends seem to want to give up their presents. After the first cycle, Echo is pleased and dashes away. No presents for Wol? Meia beckons alluringly and offers her own present: anything Wol wants. He turns her down, saying bad things come to those who accept gifts from witches.

The second cycle sees an appearance by Princess Sarah. She's still far away, but offers her own encouragement, including the usual high confidence that Wol will succeed as the Warrior of Light, and will also give Wol whatever he desires. He questions whether that's what the Prophecy desires, but Sarah states she's willing to go whichever way he chooses, Prophecy or not.

The subsequent cycles sees a procession of people from Wol's journey. Garland shows up, complimenting Wol on the strength he's built since landing on this world. Cid comes by, with a tale of how he started the whole thing off by handing out presents to kids on a particularly cold winter night. An inebriated Moggy shuffles through, to let Wol know that all of the Moogles are working for him, and will keep his trust no matter what happens. Other Moogles also gather to cheer Wol on, although he notes that Mog isn't among them... and he's okay with that at last.

Wol also runs across a group of Blanks who are down-looking. Echo says these are Blanks who have given up. Hope can't reach them, and they'll each find an ignoble fate of their own. It's a grim fate, but one that can be avoided if our hero just refuses to give up. Still, Wol muses, at least they don't have to fight anymore. Echo notes that she disappears if Wol gives up, and Wol assures her that won't be happening. He also wonders if Echo disappears after Chaos is defeated, and she admits she doesn't know. To Wol, that might be a sad thing after all.

Handing out the presents makes Wol a bit wistful. If only it were this easy to save Palamecia! But the only real hope there is the same as before: defeat Chaos. Oh well. At least this brings a little hope to the world now. 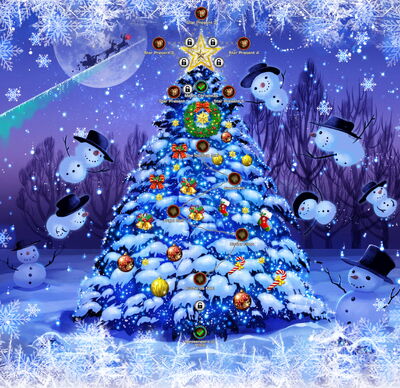 Each day of the event, the player is awarded one

Christmas Ticket. Tickets will pile up until you log in, so you will not miss out if you miss a day. One star will unlock a cycle around the first six areas. At the end of the path, you are awarded a

Christmas Star, and the tree in the region map gains some decorations.

Christmas Stars can be used to unlock the "Star Present" areas. As you complete more nights and gain more Stars, these will give progressively better rewards. On Dec 25, players who have gathered all 8 Christmas Stars gain access to the final 8 areas.

There are 20 counted areas in total on this map, with 6 locks and 5 treasure chests, but only 12 of them are open at one time -- the rest are counted up on a day-by-day basis as the player runs each day's cycle. The player can freely teleport between the initial area on the bottom section and the most advanced (unlocked) area in the top section. 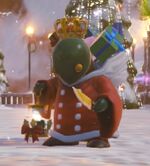 Berry Christmas... No spells at all. Even the "Bah Humbug!", while looking menacing, is harmless. 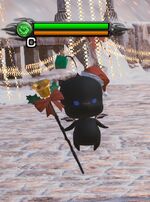 Very merry kupo! No attacks at all.

These get big and say they're ready to blow, then just shake... with jingle bells, of course. No attacks.

These act like normal, so they WILL attack and damage you.