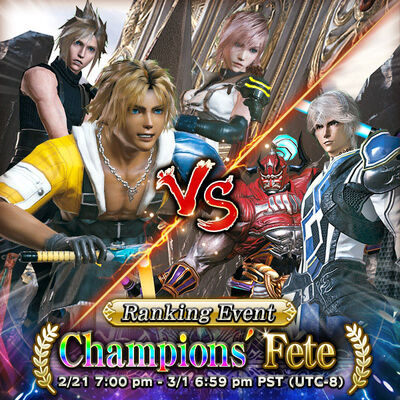 Warriors' Fete was a Ranked "battle tower" event available in February 2019, as part of the Warrior's Feast celebrations. It featured a challenge with progressive difficulty from the heroes you've met in collaboration events -- notably Cloud, Lightning, and Tidus. 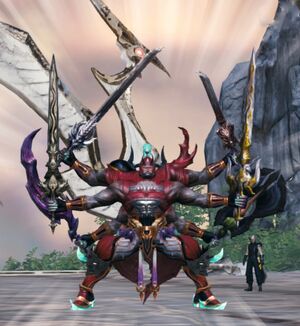 Wol finds Gilgamesh on the beach from the Summer Dream event, enjoying the sun until Wol disturbs him. Wol notes that Gilgamesh doesn't seem to have lost any of his memories, which makes sense for a cross-reality being like him.

Gilgamesh is happy to see Wol participating, but he's disappointed that he doesn't see more jubilation and confidence. Wol beat the great evil, after all! He should enjoy his place as a bona fide hero! But Wol is just his usual droll self. Oh well, some things never change.

But as a special part of the celebrations. Gilgamesh has brought friends -- the heroes from other worlds! Yes, it's Cloud, Tidus and Lightning. Since Echo isn't around to help him anymore, Gilgamesh will substitute his own support! Wol is a bit weirded out, but just like always, a battle or two will sort it out.

In each area, Gilgamesh appears as the second skirmish. On the levels up through Ragnarok, he casts a special set of boons on you around a random element, then leaves. However, in the Phantasmic Coil, he offers you a choice of boons, based on those same elements. Pick one by nature of the LAST attack you make against him, at the end of the turn.

The third skirmish will be against an Ultimate Hero. These heroes will typically open with their signature Ultimate Attack, with a fairly normal amount of damage and effects. In the center areas (10th, 20th, 30th, Ragnarok) and the Phantasmic Coil, they are assisted by a companion boss, who will also attack you!

Once you reach the Phantasmic Coil, the Ultimate Heroes (and their allies) will have an extra number at the end of their HP bar, indicating their own Ultimate Gauge. When that number hits 99, they will unleash an extra-powerful Ultimate Attack! Each of their actions will increase the gauge, but physical attacks on them will reduce it. 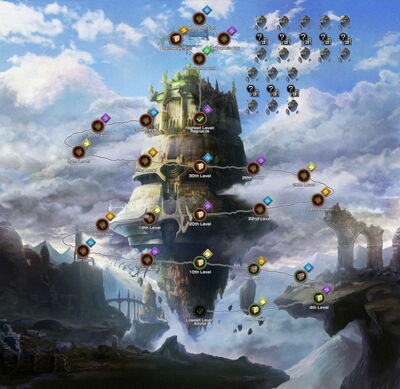 After completing the Highest Level: Ragnarok, you enter the "Phantasmic Coil" areas. This is a set of 4 areas that repeat in an infinite loop, also with an increasing difficulty with each area finished. On these levels, there is no fifth Rental Card allowed, and if you lose, you cannot use

Ability Ticket x5 is handed out for each loop of 4 completed.

The "ladder" consist of 40 levels, but only 20 actual areas. As you progress, the previous areas become inaccessible -- you can only go up. However, the center areas (10th, 20th, 30th, Ragnarok) can be revisited at any time.

Each area also drops a set number of

Gilgamesh's Medals each time you clear them. Amounts are higher for the more difficult levels.

The four levels after Ragnarok are set in an infinite loop, with a prize on the completion of the fourth area on each loop. Players cannot use

The first skirmish here has a pre-set collection of fiends, but after the 55th Level it will change to other fiends. The second and third skirmishes always remains as described.

On each level you can earn

Gilgamesh's Medals. Most of the areas can only be visited once, but the 10th, 20th, 30th, and Top Levels can be revisited an unlimited number of times.

Gilgamesh's Medal x88 will allow you to open one of the special treasure chests at the top of the map and obtain an Ultimeh Card!

The top row are the return of cards from Gilgamesh's Gala:

The bottom row are new ones:

The most efficient would be to replay Ragnarok repeatedly, since this gains 8x Medals for 6 stamina. At this rate, all 8 Ultimeh cards can be obtained within roughly 75 replays. (using 3 days' total stamina). If you're proficient enough, you can use the Phantasmic Coil to reduce this -- it rewards 20 Medals per 8 stamina -- but the difficulty will increase with each area you complete. Using only the Phantasmic Coil can get you all 8 within 28 areas. (7 full loops of the Coil).

The ranks have been expanded to more levels, and there's a definite cap at the bottom of the ranks. Anyone who completes all of the normal levels should make it within the top 30,000 players, it may still require a run or two through the Phantasmic Coil to breach the top 10,000.

This is also the first ranked event to offer

Rainbow Keys as a reward. These are used to open special high-end rewards in The Rift.