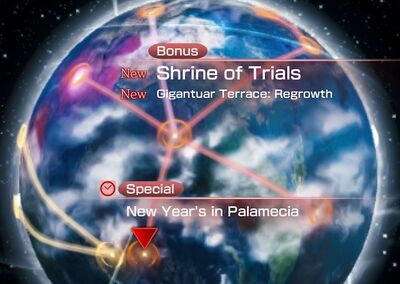 Traveling to an available region is done via the "World Map" icon in the "Home" menu. The world map is unlocked following the completion of Runic Temple Basement in Chapter I: Blank Slate.

See individual pages for summaries about each region. The list is sorted according to the "List View" of the in-game world map.

These regions only appear for a limited time, from one week for Tower regions to two months for Crossover regions.
See Events for a full list.

These regions have been removed from the game.

Originally these were versions of the first four chapters, with stronger foes. With the release of Act 2, these were removed because they weren't that hard anymore.

removed in favour of the new Yggdrasil: Materials zone