Cactuar is one of the special Fiends in Mobius Final Fantasy. Its main purpose is to drop Cactuar (Card)s, used to increase the number of Skillseeds that Abilities will gather during normal gameplay.

The cactuar is a very weak opponent, and its hits are fairly light, but it has a high Break point that must be overcome to kill it. When combat opens, its elemental affinity will be hidden. Hitting it with the right (or wrong!) element will reveal it.

Cactuars usually appear as rare, random fiends during events, but they have one region specifically meant to fight them. 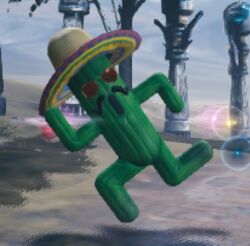 The Straw Cactuar has a nice hat
Retrieved from "https://mobius.gamepedia.com/index.php?title=Cactuar&oldid=89747"
Categories: