The Brachiosaur is a special Event-only Fiend in Mobius Final Fantasy, featuring as the main foe in the Conviction and Condemnation event of June 2019.

The beast has a very high HP, with a middling Break gauge. As a Ranked Battle Tower adversary, its strength increases the more times it is fought, to a theoretically infinite level.

Brachiosaur always opens with a shot of Rainbow, then does normal attacks, Rainbow, and boons from there.

If at any time his HP bar is lower than his red Break bar, he will cast Condemn, which removes two of your boons -- even if they're enhanced. This can quickly deplete all of your boons, so it's wise to get his Break bar down quickly!

This is a particularly nasty ability, since it does not only multi-strike damage, but also casts seven different ailments on you! However, these can be avoided if you have particular elemental resistances:

These resistances can be applied using various equipped Abilities of your own, or more commonly with Element Drive, though that will only yield 3 elements unless you're very good at Job Change Shifting. More useful will likely be applying "Omni-Drive" resistances, using Supreme Cards or some Jobs (the new Scharfrichter's Ultimate does it).

Bio ailment is non-elemental, so there's no resistance to block it. However, applying

Immune to ailments through Lights of Hope (Card) and others WILL block it, along with all of the other ailments. 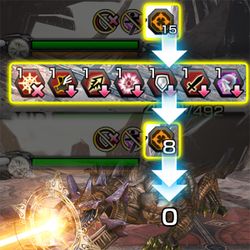 On the fiend's status bar you can find the

Brachiosaur Counter, which starts at 15. Each ailment it successfully lands on you will reduce the counter by one. Multiple ailments will drop this counter quickly, so be prepared!

Once that counter reaches zero, the Brachiosaur will shift to its Ultimate attack, Convergence. This causes a straight 99,999 damage to you. This is a ONE HIT KILL, ending your game unless you can block it with

Divine Shield or something similar.

Wall won't nearly be enough, unless you can boost yourself to over 80,000 HP.

Make sure you Break the creature or kill it before it reaches this point, at all costs.

If you Break it when its Counter has reached zero, the counter will reset, but only by 2.