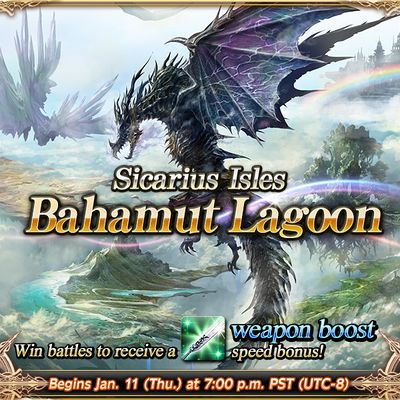 Bahamut Lagoon is a space for high-level battles against the first-gen Sicariuses. The areas have a heavy stamina cost, but offer some rich rewards!

Go to the purple Bahamut Lagoon region spot on the World Map -- part of the red "specials" section.
You must have completed Chapter 1: Blank Slate to get there.

Probably the greatest advantage for this region is the increased speed for Weapon Boosts. Under normal circumstances, defeating areas in the game will take time off the counters for Weapon Boosts, making the boosts finish faster. However, in the Bahamut Lagoon this effect is increased by 50%

So, while a run through a 40-stamina area would normally take 4 hours off your weapon boosts, in here it takes off 6 hours.

Many advanced players use this to great effect with their excess

Elixirs (especially on Mobius Day), often taking weeks off their total Boost times, in pursuit of the perfect maximised weapons.

Wol, Meia and Echo show up this cluster of islands with a flourish. She announces that they are standing on the islands where the Sicariuses go to sleep! Receive their power (by defeating them, of course) and new strength will fill Wol's being! Wol is suspicious of anything that would get Echo so excited, so he knows this is going to be annoying, but what the heck. 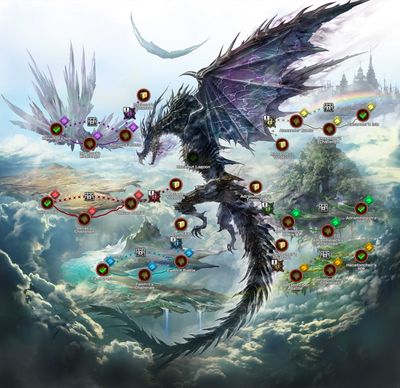 There are 49 total areas here -- 4 for each of the 12 Sicariuses, plus the entry area -- though only 25 are open as of Batch 3. Each Sicarius offers an island with three difficulty levels. Challenging and winning each one will give an increasing chance of dropping a ★5 Fractal for that Sicarius's element, plus "Treasure" components.

Once you teleport onto an island, an extra treasure chest appears, though this is not an actual area. Use Treasure components x300 to open the chest and claim its prize: a

Prismatic Fractal★4: Elemental Resistance +7% in that element. These chests can be opened -- and the Prismatic Fractal claimed -- an unlimited number of times, as long as you have the Treasure components to open them.

As an additional prize, if you defeat the strongest of the three levels without dying, you gain access to an extra area with one fight against a

In one corner of the screen you will find the Shortcuts button, which gives you a simple two-click transport to Pandemonium, Yggdrasil: Materials, or the Ring of Braves.

The name of the region and the artwork of Bahamut in the center are a direct reference to Bahamut Lagoon, a Japan-only SNES title by SquareSoft before the merge with Enix.