Aquamoogle is an interesting new play mechanic added to the Summer Resort: Beach Rally event. He is a "cheerleading section" for you during your fights, giving you incentive to work on targeting/damaging your opponents, while not hitting the Aquamoogle standing next to them.

On each skirmish of the Beach Rally course, an Aquamoogle will appear within the crowd of fiends. If left alone, he will cast

Regen at you at the beginning of each turn. 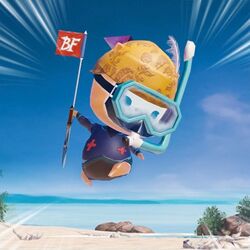 If you use the Aquamoogle (Card)'s ability Shake it like a Red Pom! on the Aquamoogle it will gain health back, and the Moogle will show his gratitude by casting Quicken on you for a 3-action bonus.

But... if you damage him... then he'll express his displeasure by throwing Sleep and Stun at you. Given the tight constraints to finish these fights, you'll probaby end up failing the course as a result. Keep your Area Abilities away, and use Cone Abilities judiciously... or be prepared to heal the Aquamoogle after you use them! He'll keep boosting you after that, but grudgingly.