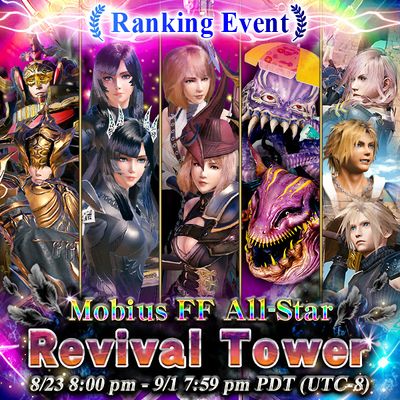 Mobius FF All-Star Revival Tower is the Ranked "battle tower" event for August 2019. This is a multi-tower event, like the Aggregate Aggression contests of 2016 and 2017, taking the boss fights from five of the previous battle towers and combining them into one event:

To shift things up, the first four towers can't use any Ultimate Heroes. You must conquer them using the specified job classes!

Wol shows up at the Tower of Trials on his regular rounds. Although the System of Palamecia has been destroyed, the Tower remains, stoic as ever, and waiting for those who wish to fight.

Wol finds a fairy presiding over it, but it's not his Echo. She asks if the place comforts him, and he notes there's no more reason to fight here. But the fairy disputes that, accusing Wol of preferring fighting to boredom. Perhaps... but he can see where this is going. The fairy has a new challenger for him, and tells him to revel in the glory of eternal combat. (She sounds similar to Vargas, actually.)

Each tower's cutscenes and storylines repeat from their original events. 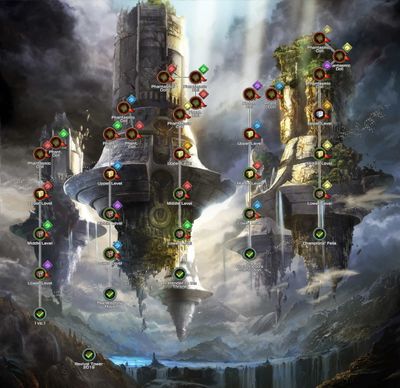 Not all areas are shown.

There are five different towers, with four areas each, offering different bosses -- and a different restriction -- on each tower. Each tower will offer a video cutscene involving the storyline from its original event.

Players can choose to teleport to or "climb" the towers in any order, but cannot revisit areas that have already been defeated. (except for the immediately previous area as a teleport spot, but this area will not have the boss foe)

Each tower then concludes with its own infinitely looping "Phantasmic Coil" area. This is a set of 5 areas that repeat in an infinite loop, also with an increasing difficulty with each area finished. On these levels, a Prize of

There are 45 total areas across six towers, with 20 treasure chests. Since the last treasure chest in each tower (in the Phantasmic Coils) automatically regenerates, the region can technically never be completed.

This tower features battles against five of Wol's recent Legend Jobs. Players must go in with a Wol job (

Monk) on both the Main and sub-Jobs. Ultimate Heroes are not allowed.

See I vs. I for combat details.

This tower features battles against five of Meia's recent Legend Jobs. Players must go in with a

Meia job on both the Main and sub-Jobs. Ultimate Heroes are not allowed.

This tower features battles against five of Sarah's recent Legend Jobs. Players must go in with a

Sarah job on both the Main and sub-Jobs. Ultimate Heroes are not allowed.

See Pretender to the Throne for combat details.

This tower features battles against five of Sophie and Graff's recent Jobs. Players must go in with a

Graff job on both the Main and sub-Jobs. Ultimate Heroes are not allowed.

This tower features battles against some of the grandest foes of the past 3 years. Players can go in with anything!

Gilgamesh is on hand to grant the player a set of boons before hitting the main foe, dependent on the element that you use on your final strike against him. See the Champions' Fete for combat details.

Each tower offers its own rewards as you defeat each level, shown in the tables above. But there's more...

Finishing the Highest Level of each tower counts as "clearing" that tower. Doing so will net an extra reward, based on the number of towers that have been cleared so far:

Ranks are determined by how many areas have been cleared in total, across all towers, including the Phantasmic Coils. People with the same number of areas cleared will be ranked by their highest Battle Score during the event.

These marks are given as a counter for each Boss kill. They have no direct use.