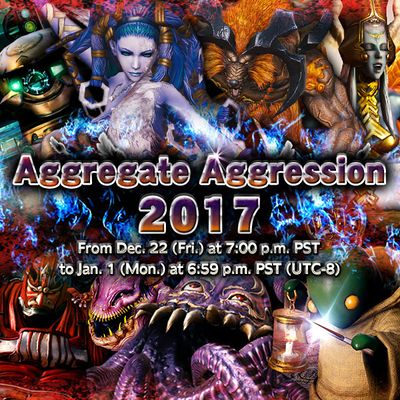 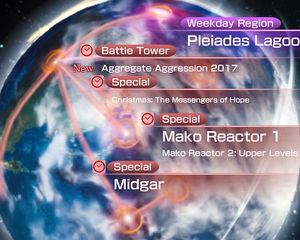 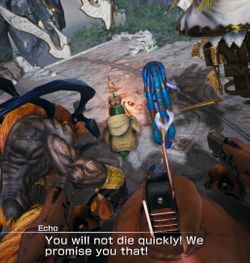 Wol and Echo show up at the Tower of Trials again, and are met there by a cadre of enemies and Sicarius that Wol has previously defeated. Their leader the Tonberry King (through Echo's translations) expresses their anger, with a promise that Wol will die... painfully! He's all for the attempt.

Each tower's cutscenes and storylines repeat from their original runs.

Wol arrives at the Tower of Trials to find the local fiends have summoned a Tonberry: monsters of Karmic revenge. Sounds like a challenge! Each of the fiends that Wol meets hisses and spits at him, but he can't understand a word of it. Neither can Echo, apparently, but she says they must be seriously angry to call a Tonberry on him. This karmic backlash is going to hurt.

The minions are coming from the Sea, where Chaos supposedly spawns them. But they come in many forms, some weak, some strong. There's suggestion that they start out weak and work to grow stronger... just like the Blanks. Maybe they're all the same. No matter - their function is to kill people, while Wol's function is to stop them.

When the Tonberry King finally shows, it's a brutal fight, but Wol wins. The Tonberry makes a glyph of "congratulations"... then declares "Oops, that was a typo. I'll let you live for now." and rushes off in embarrassment.

Echo and Wol are at the Tower of Trials when a strange purple octopus appears. It spots Echo and is immediately interested in such a pretty girl, but just as quickly rebuffs her, calling her Ancient before running off. Echo is furious! Wol promises to give it a stern talking-to, and gives chase.

It's a pretty short chase, as Ultros turns and tries to flirt with Wol instead. Wol gives as good as he gets, though, which thoroughly disgusts the creature. It calls for help from its good friend Typhon. The fire breather obliges, but it's obvious that, like Wol, it's bailing a loudmouth friend out of trouble... again. The two seem to bond pretty quickly, until Wol points out they're here to fight... and the contest resumes.

Typhon hits hard and Ultros is annoying, but in the end Wol mops up the field. Typhon and Wol swap battle tips while Echo forces Ultros to repeatedly apologise and compliment her.

A new warrior appears at the Tower -- the cross-Plane adventurer known as... Gilgamesh! Even though Wol is a Blank, he knows who this guy is, and it throws off Gilly's entire introduction. Gilgamesh gives Wol some admonishment for having no clue about proper heroic presentation. Gilgamesh explains that every one of the worlds he's visited had its Hero, and every one of them had a heart aflame with passion. Wol's heart is definitely not! No Warrior of Light is complete without it, so it's time for some extra training!

Gilgamesh tries to recount all of the heroes he's met (through the 15 main Final Fantasy games), and he emphasises the struggle past overwhelming odds as a necessity for heroes. Wol would rather not, if he can avoid it. So Gilly tries one last method: the secret relationship between them. Gilgamesh is Wol's father! Ugh. Wol finally shows some passion: to soundly kick this buffoon's butt.

That passion works. Gilgamesh is laid low very quickly by a seriously annoyed Wol. He congratulates Wol on showing the passion of a true hero, and states he'll be back sometime in the future before jumping away. 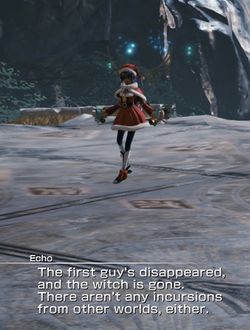 Echo is now in charge of the Tower of Trials! Since there are no incursions from other worlds happening, this is a great time to stock the Tower with new and interesting fiends... all for Wol to fight and improve, of course. The special of the day: The Guard Scorpion!

No drama, no complications. Just set-em-up and knock-em-down. Wol tires of the repetition, and questions whether there's an end to it. Only once he becomes the Warrior of Light, Echo says. And if he stops? He'll be just another Blank who didn't make it, quickly forgotten. As long as he keeps fighting, there's hope to be found, and people will remember him.

After Wol beats down Ultima for the full cycle of the zodiac, Meia offers offers her congratulations and wishes Wol good fortune against all foes. The embattled blank questions this, since this seems to be exactly what Vox wants, but Meia expresses her confidence that he can prove to Vox he is the Warrior of Light, while still remaining his own man -- something that could very well upset the entire world order. Echo agrees that such a thing would be fun to see.

Echo and Meia are at it again... plotting a special treat for Wol. This time, they've both conjured a Sicarius for Wol to fight. That's a surprise: Echo can summon! Maybe she's been learning from Meia. This will be fun.

Okay, maybe not so much. Echo confesses she just went through the motions, while Meia did the real work. Wol is not surprised. Echo says she cares what Wol says, though, which does surprise him -- he'll have to remember that for the future.

Wol smacks Ifrit and Shiva down in record time. The two ladies are disappointed, and promise to conjure something even more difficult for Wol next time. 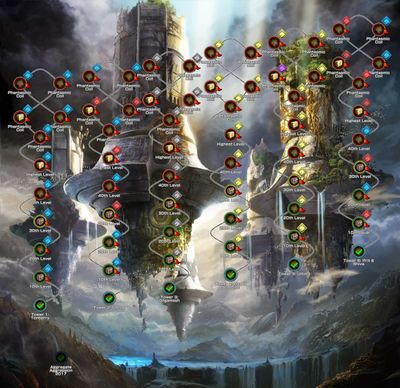 There are six different towers, with 6 areas each, offering a different "boss" on each tower. Players can choose to teleport to or "climb" the towers in any order, as well as visiting any area that has been previously defeated. Each one will offer a video cutscene involving the storyline from its original event.

Each tower then concludes with its own infinitely looping "Phantasmic Coil" area. This is a set of 5 areas that repeat in an infinite loop, also with an increasing difficulty with each area finished. On these levels, a Prize of

There are 67 total areas across six towers, with 24 treasure chests. Since the last treasure chest in each tower (in the Phantasmic Coils) automatically regenerates, the region can technically never be completed.

Finishing the Highest Level of each tower counts as "clearing" that tower. Doing so will net an extra reward besides the Pneuma, based on the number of towers that have been cleared so far:

Ranks are determined by how many areas have been cleared in total, across all towers, including the Phantasmic Coils. People with the same number of areas cleared will be ranked by their highest Battle Score during the event.

These marks are given as a counter for each Boss kill. They have no direct use.