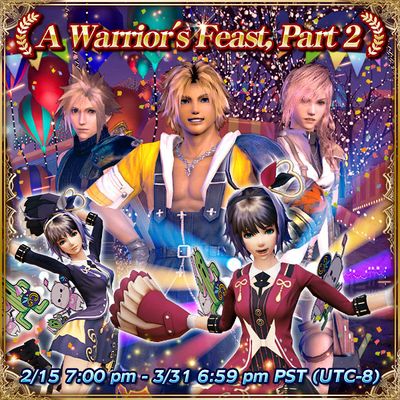 A Warrior's Feast, Part 2 is a celebration of the end of Act 1 in Mobius Final Fantasy. The region includes many of the characters and foes that have appeared in previous Mobius events since the beginning of the game, including Tidus, Lightning, Cloud and more.

The event was regarded as the 3rd Anniversary in Japan, so many of the graphics are styled with "3" motifs. 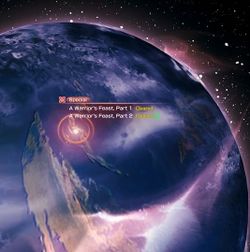 Go to the Warrior's Feast, Part 2 region spot on the Act 2 World Map.

Continued from A Warrior's Feast, Part 1 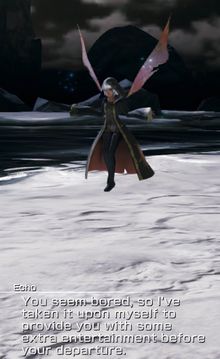 Wol is ready to exit the scene, while Echo Rouge tries to dissuade him. An opportune moment, then, for Echo Azul to pop up a hovering video screen showing (!) the festivities. The latest development: more guests have arrived -- Cloud, Lightning and Tidus -- to celebrate the Warrior of Light.

Wol still insists he's not the Warrior of anything, so Rouge asks him: what is the Warrior of Light? Wol responds that it's the prophesized hero meant to vanquish Chaos and bring hope, but Wol also says that he vanquished hope instead... and caused the Dark Flood that washed everyone's memories away. Rouge disagrees, saying he did bring hope to these people. Did he ever think to ask them?

Looks like there's no getting out of this. Back to the party we go.

Once there, it's remarkable the number of notable people who showed up. Meia talks about how Wol freed her from a circle of vengeance. Sarah found a new fire in herself that she would never have found without him. Cid surfaces to remind Wol that though the System of Palamecia is broken, hope always springs anew. Moggy points out that it's better to be happy, especially for those that aren't around anymore. Even the ghost of Larrow the Guard Captain appears to give Wol his thanks for giving meaning to the Blanks' sacrifices.

Cid also points out that none of them are really there. They're all just visions in a Rune. But no matter, for the sentiments are all real, and the Echoes assure him that it's so. But illusions don't count for much in Wol's eyes, and he just wants out. Gilgamesh shows up and defends Wol's perspective, saying he merely sees through to the truth of the matter. Even so, Wol doesn't care. 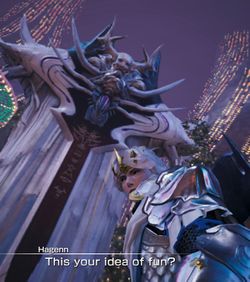 But apparently the latest guest to show up does care: Chaos. Wol quickly concludes he's just an illusion too. The platinum-haired Dark Echo appears again, and Wol realizes that she is the one really driving the whole event. She's not done yet, either. Time for the next round of action: matching wits and skill against other heroes! Enter our three warrior friends Cloud, Lightning, and Tidus... or at least, formidable illusions of them.

The Dark Echo conjures areas from each of the campaigns (Fatal Calling, Lightning Resurrection, and Dream Within a Dream) for Wol to reflect, and to prove his prowess again. He does a decent job of overcoming each one... again... but confesses to Echo that he hasn't learned anything new from the other heroes, despite her best efforts.

There's a surprise in the process. The other Echoes are not happy that the Dark Echo seems to have taken over. They're not working together, and the Echoes warn Wol that this one is bad news. Wol's not impressed -- he thinks all of the Echoes are a threat.

Undaunted, the Dark Echo re-conjures Chaos, along with his lieutenants, in a more powerful form, and again Wol strikes them down. By now Wol is getting annoyed by all of the action, as Echo promises a never-ending series of battles against Chaos for the eternal Warrior, and snaps that he'll fight whatever gets thrown at him, however many times it's thrown at him! 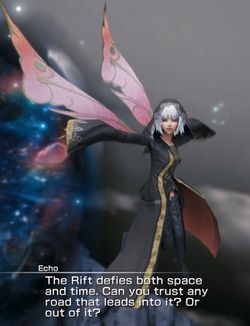 Enter Gilgamesh. The wanderer applauds Wol's spirited anger, but accuses him of being far too willing to follow Palamecia's lead. "No choice..." pfagh! Gilgamesh has an alternative idea: go hit up The Rift for profit and glory! Dark Echo warns that the region is a place that defies space and time. (and storylines!) Wol is tired of people telling him what to do, and jumps in. Though Gilgamesh is willing to be his guide, the wanderer is pulled away by a "warp" spell from some other game, leaving Wol alone.

Wol returns to the Festival grounds, where the Rouge and Azul Echoes are very apologetic about all of the troubles. They just wanted Wol to enjoy himself. Wol pledges they can make it up to him by staying with him as he continues his adventures. 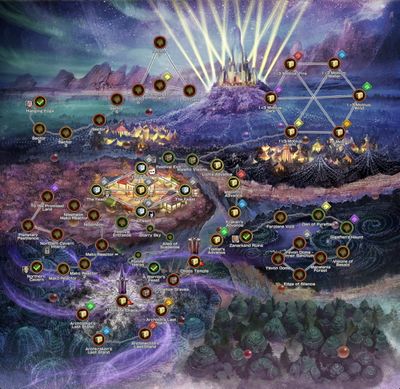 There are many enemies here, recurring from previous events in the last year. However, nothing drops any Ability Cards. You get listed Treasures only. (and the occasional Magicite or Skill Coin)

There are 57 areas in total, including 25 treasure chests.