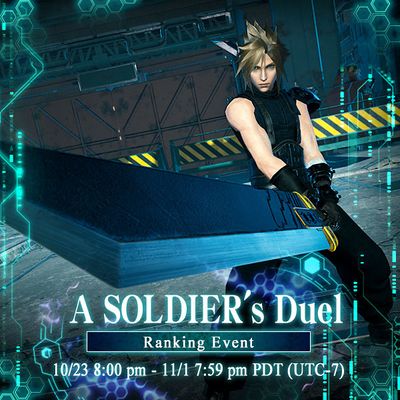 A SOLDIER's Duel is a Ranked "battle tower" event offered in October 2019. It features a progressive battle against Cloud Strife. 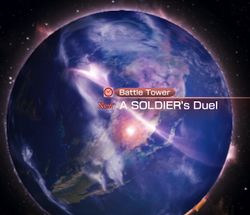 Graff, Sophie, and Meia show up at the Mako Reactor... and there's no animosity. Everyone is pleasantly chatting, including the Shinra Soldiers! Graff is greatly confused by this, and asks Wol who he should fight. Wol points to Cloud (Sicarius), who is more than ready to test the mettle of everyone assembled. Game on!

Play in this area works through a single chain of levels, from the beginning Outer Midgar area up to the top Ragnarok area. As you work your way around the city, the battles at each level will get progressively harder.

The new aspect for this challenge is that Cloud gets help from his friends! Cloud starts out his fight by summoning Aerith or Tifa for special "sub-attacks". These are usually boosts to his strength, but may also be very damaging attacks on you. He'll repeat these as his final action on each turn.

Ultimate Gauge increases every time he takes damage (but not during Mobius Zone or while he's Broken). As it increases, his attacks get stronger. Once it hits 99, Cloud gains

Limit Break status -- his next turn will start with his Ultimate attack, Omnislash ∞. It's a hazard to protect against, but it's also an opportunity, because once he reached full Limit Break status, his defensive stats go way down, making him much easier to damage or break! Take advantage of this!

In a few instances, Cloud does not start with a sub-attack, but instead gets an Ultimate Gauge at 96. He's extremely well protected in this form until he hits Limit Break. 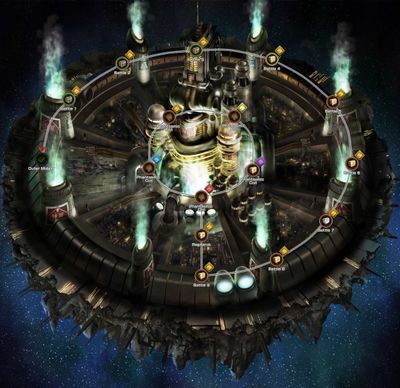 The region has one path with a staircase up, leading up to the top at the 10th level. You cannot return to previous areas once they've been beaten.

After completing the Ragnarok area, you enter the "Phantasmic Coil" areas. This is a set of 5 areas that repeat in an infinite loop, also with an increasing difficulty with each area finished. On these levels, there is no fifth Rental Card allowed, and if you lose, you cannot use

Phoenix Downs to continue.
A Prize of

The skirmishes here have a pre-set collection of fiends, but after the 35th kill they will change to other fiends, and again after the 85th kill. The third skirmish always remains as described.

Anyone who completes the first level should make it within the top 20,000 players. It will require a run or two through the Phantasmic Coil to breach the top 10,000.